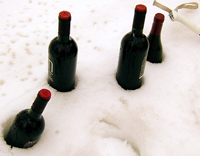 By Jason Kallsen on December 11, 2010 in Uncategorized

Image is from the wonderful not to be missed Dr. Vino blog (Tyler Coleman) who has an another good story of wine and snow.

I awoke early this morning, looked out the window, and smiled.  It’s a snowday.

The predictions are in the range of 15 to 24 inches of the white stuff, with strong winds, for the day.  Followed by sub zero air temperatures by tomorrow.  What does this mean?  Time for some wine!

Set up on the counter, ready to go (for later, it’s only 9am right now) are the following:

Brewer-Clifton Sta. Rita Hills Pinot Noir 2008:  I love this stuff, and I really like what Greg Brewer is doing in Santa Barbara.  His winemaking style is controversial and extreme.  For instance, no new oak at all on the wine, but he co-ferments the dried stems of the grapevines with the must with the (I think correct) idea that “The best meat is cooked with its bones.  The best fish is a whole fish instead of just the fillet.  The sweetest meat comes from near the bones.  So this is simply doing what the wine naturally wants to do.”  This wine is perfect example of why alcohol level doesn’t matter, but balance does.

La Bastide St. Dominique Chateauneuf du Pape 2007:  Holy Bacchus!  Aromas of clove, black pepper, a hint of licorice, and beautiful pure black raspberry.  Almost sappy in the aroma.  Taste is exceedingly well balanced but young and forceful (which is a quality I like).  A strong wine with a careful and beautiful personality.  Being enjoyed with charcoal grilled bone in rib eye … perfecto!

… and the Seghesio Old Vine Zin was not opened.  Will have to wait for another day.  To pop it after those two bottles would have been fun, but would not have done it justice.

Starting next year: The National Day of American Wine
The Ultimate Wine Cellar

One Response to Drinking wine on a snowy day