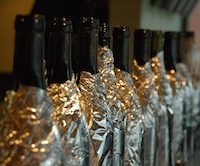 By Jason Kallsen on April 20, 2011 in Uncategorized

Two nights ago I conducted a fantastic class called “Battle of the Cabernets”.  It was a great event, and an eye-opener for everybody involved.

I’m not a fan of blind tasting in the way that most approach it.  I don’t like being handed a glass of wine with somebody asking “What do you think it is??”  That’s called a parlor trick, and not wine evaluation.

(I have, however, hit the bottom of the 9th grand slam twice in my life when handed a truly blind glass of wine … once with a 1990 Altesino Montesoli Brunello and once with 2006 Saintsbury Chardonnay.  Two wines, out of about 20,000.  That’s a low batting average.)

What I like doing is tasting wine in a blind setting with some context be it grape variety, region, vintage, price, or other parameters (or combo thereof).  It’s important, for so often in “fully blind” tasting if I step wrong on the first analysis then I’m heading down the wrong path immediately.  In other words, all those higher alcohol Pinot Noirs might make me think at first “Hey! Syrah!” and from that point on I think I’m tasting Syrah.  What’s interesting here is that it might be a great wine, but if it’s a great Pinot that tastes like Syrah then it’s not really very good Pinot!

Wine has stories, and wine has context, and tasting the wine in the context is important if you want to grow as a wine drinker.

So onto the Cabernet tasting. We did eight wines, ranging from $16.99 to $83.99 a bottle, and ranging from 2000 vintage Bordeaux to 2009 vintage Australian.  Quite the line up.  The best part of the evening came at the end, wines B3 and B4, which were both from Alexander Valley.  They showed similar terroir: that dusty ripe red raspberry so indicative to Alexander Valley.  One wine (B3) was a bit simpler, a bit riper, lacking in structure and depth.  The finish was short.  The next wine (B4) was complex, complete, and showed layers of connection between the flavors which I think is pretty important.  I don’t want a wine that jumps from one thing to the next … I want a symphony, and this was it.  But my opinion doesn’t really matter (nor did I vocalize it for the group) … I asked the class (15 people) who liked B3 the most.  No hands.  Who liked B4 the most? Everybody.  Then I told them a secret … one wine was $19.99 a bottle and one was $83.99 a bottle.  Who thought B3 was the more expensive wine?  Four hands.  Who thought B4 was the more expensive wine?  Nine hands (two people didn’t vote).

The wines were revealed and jaws dropped.

Wine B3 was the cultish revered Silver Oak Alexander Valley Cabernet 2004, $83.99 a bottle.