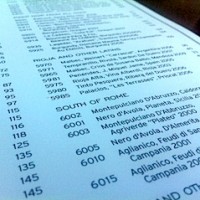 By Jason Kallsen on May 10, 2011 in Local wine lists, The inside scoop

Recently I had a leisurely lunch at D’Amico Kitchen at the Chambers Hotel in Downtown Minneapolis. It’s one of my favorite rooms in the city, and I’m happy to see the restaurant continue to bring in customers even after transforming from the former Jean-Georges inspired Chambers Kitchen.  For quite some time, they were running a $10 pick-three lunch special that was packing people in (Dara even called it “The best cheap lunch in Minneapolis“, but alas it seems to no longer be available (at least it wasn’t offered on my visit).  However, a great menu greeted me and about two hours later I left happy and satisfied.

This lunch was on one of the first great days of Spring in Minnesota, and every downtown office worker seemed to bust out to enjoy the sunshine and walk around in the fresh air with their head held high (after months of the run through the cold “crouch” this was nice to see).  The parade is fun to watch from the venue of D’Amico Kitchen.  Not quite as much fun as Saint Patrick’s Day at Meritage, but that’s for another post.

The D’Amico Kitchen wine list is really something (to see it click here, but don’t follow the link for ‘Wine list’ … it’s a dead link.  Rather click on ‘Menus – Dinner’ … the second half of the pdf will be the wine list).  What I like about this wine list, and it’s something many other restaurants could learn from, is the crystal clear organization of the categories even when your wine is from all over the world. The headers “Chardonnay from all over” and “Pinot Noir from all over” are self explanatory and straightforward but they become a good catch all for California gems and Burgundy diamonds … and I’d bet they sell more Burgundy than most as a result.  The header of “Cabernet and other Bordeaux-style bigs” becomes a fantastic grouping for full bodied red wines ranging from Napa Valley gems to Super Tuscans and even a big Merlot from Umbria.

But my favorite part of the list is a beautiful solution to a problem I’ve run into many times when designing wine lists: what to do with Italian wines from all over the southern half of the country, but from regions many people might not be familiar with.  I’ve found you can’t just say “Apulia” or “Campania” and expect people to understand.  This list solves that problem with “East of Milan” and “South of Rome” … a beautiful solution.

While there aren’t any obnoxious bargains to be had (obviously the list is put together carefully and the common mis-pricing mistakes other restaurants make are not to be found here), it does offer a few great bang for the buck selections.  Notably in the “Chardonnay from all over” category William Fevre Chablis 2006 for $44, and under “Rioja and other Latins” the Malbec Crios de Susana Balbo 2009 for $33. If your budget allows a bit more room, the $113 Tomasso Bussola Amarone 2003 would be a fine pick.

If you are holding the company credit card and are planning to quit tomorrow, go whole hog on the $400 Giacomo Conterno Monfortino Riserva Barolo 1997. That is one of the finest bottles available at any restaurant in the Twin Cities, period.  I don’t know if that inventory is left over from the Chamber’s Kitchen days, but it’s good to see some gems available (for a price, of course) in our local wine scene.   That is important.

Disclosure note: The author works for The Wine Company, supplier of the William Fevre Chablis, but does not sell wine personally to D’Amico Kitchen.  All other selections mentioned are from other wholesalers.

Winegeektv.com: The best local wine show you might not know about
Wino Wednesday: May 11th, 2011