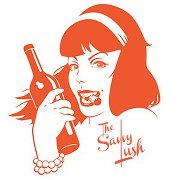 Out of nowhere, a spirited young woman named Allison has hit the wine scene. Welcome The Savvy Lush to the Twin Cities wine world.

She’s a good one to have here. Not everybody understands the balance between being knowledgeable and being boastful. (Or, to put it another way, there are a few bad eggs in our otherwise glorious local wine scene. People that think negativity is a power to be wielded while climbing over the bodies of those that are trying to blaze trails.) I was so impressed by what Alison has done in a short amount of time that I invited her to share a glass (or five) with me recently at Scusi.

For all you retailers and restaurants out there, listen up: Allison embodies the future of a very important part of local wine journalism. The tech savvy, personable, engaged consumer. In a stunningly short amount of time she has become somebody that a core group of local wine drinkers seek out.

Talking with Alison was great, and we’ll do an interview segment soon so you can get to know her better.

The craft beer world has had these type of writer-folk in spades for a number of years, and it’s one of the many reasons that craft beer has the current spotlight in the Twin Cities (and it’s a wonderful thing). But there is a decided lack of local wine writers focusing on locally available products and local restaurants. The MN Food Bloggers have become a movement. The craft beers geeks are a force to be reckoned with.  But besides Bill Ward and Leslee Miller, we don’t have a major local wine writer’s scene. (I don’t count the Reverse Wine Snob even though I love what he does — I think his audience is decidedly national based on his writing, which is cool. The dude has hit a groove based on his number of twitter followers).

This website was designed to be part of that world, and for all I know it may well be in the future. I work in the wine world for the best wholesaler in the state (The Wine Company), doing things that no other wholesaler is doing (major social media presence, incredible events, and more … in fact, much more is coming soon. The wrapping is coming off a major project in the next couple of weeks, which will be announced on this site as well). Over the years I’ve learned that I can’t be all wine, all the time. So my creative wine energy for the last year plus has been to my day job. This is why I’m happy to see somebody like Alison burst onto the scene: it reminds me of back when I started this site.

What The Savvy Lush is doing shows what is possible with passion and focus. She has branded herself, she is out shaking hands, and she is staying positive (I can’t stand it when snobbery and elitism creeps into wine blogging … more on that later). I wish all the best to Alison on her venture. Be sure to find her, follow her, and like her.

PS: A private thanks to the person that contacted me pointing out I hadn’t posted anything in a few months … ironically from the last post talking about retailers that don’t post often! Funny! Whoops.

An open letter to Minnesota wine retailers
The cost of a wine vs. the value of a wine

One Response to New kid on the block: The Savvy Lush