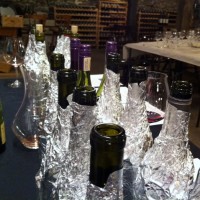 Yesterday was the annual Twin Cities Wine Pinot Noir Battle, in which we serve a wide variety of incredible Pinots side by side in a blind format (bottles wrapped in foil, with no details revealed) to determine crowd favorites and see if price actually does matter.

Before I get to the results let’s talk a bit about blind tasting, which is held up as the pinnacle of “fairness” when it comes to wine evaluation.

In a blind tasting, you strip the wine of any influence in the form of price, label design, expert reviews, scores, and other expectations. It’s just you and the juice. When you taste wine blind you are essentially leveling the playing field, and to show the true ‘value’ of a wine many would say there is no better way to do it. Small craft industries are built on tasting wine blind, and many books such as The Wine Trials use this as their form of evaluation. As they say on the winegeeks.com website, “The best way to make to make an honest assessment [about wine] is to know nothing at all.”

My opinion on blind tasting? It’s bullshit … for the most part.

Most people are surprised to hear this, so let me explain.

Wine does not live in a vacuum, and evaluating it is not the same as testing washing machines. You cannot graph out a piece of paper the percentage of happiness that is derived from a wine. And most importantly, the context in which the wine came to be will shape your impressions and enjoyment of it in magnificent, monumental, and mysterious ways. 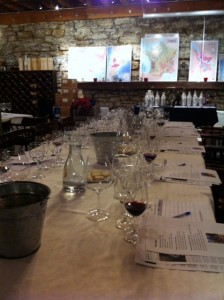 Here’s an example. You hand me a glass of Sauvignon Blanc. I swirl it and smell it. Grassy tones, ripe fruit, not sharp like a New Zealand gooseberry bomb. Lots of minerals, definitely French, I think. On the palate it’s immediately bright and lively, it has presence, and is really really good. The finish goes on and on. Damn, that’s some good wine. Then I put the glass down and you reveal what the blind wine was: Dagueneau Silex Pouilly Fume 2007, the last wine made by the genius madman of the Loire before he died in an ultralight plane crash in 2008. Suddenly, the memory and palate impression of the wine shifts … this is history in a glass. Returning to the wine, it takes on a reverence and a context that is simply impossible to comprehend. This was it, the last wine from one of the legends in our wine world. It now tastes different, and better, because I know more going into it.

See where I’m going with this?

Context, in the form of history, food pairing, personal memories, or geography will shape the taste of wine in ways that amplify details and thus enjoyment. Wine is not just grape juice. Terry Theise, in his quest to re-mystify wine has it right: we have to return to treating it with reverence, so we can further appreciate the joy it gives us.

So if I’m against blind tasting in general why did I do a huge blind Pinot Noir tasting yesterday? Because, folks, it’s just plain fun. And I did it to remind myself of one of the main reasons to taste wine blind: it’s simply the best way to learn about a varietal, period. Yesterday 25 folks earned their PhD’s in Pinot Noir.

Here are the wines we sampled, along with a few short notes.

The goal of the first flight was to compare same vintage and roughly same price wines to see if there was a ‘geographical stamp’ on the wine. In other words, I pushed the class to seek out the aromas and tastes of Burgundy vs. Oregon vs. California vs. New Zealand. Additionally, I asked everybody to rank the wines from first to last in terms of pure hedonistic enjoyment, i.e. “Which made you smile the most, or which did you unintentionally drink up first?”

The class favorite was the LIOCO, which was showing beautiful richness and ripeness (as well as stunning balance). LIOCO is a hands off producer, with lower alcohols than most California winemakers, but it still had a richness unlike the others. In a blind tasting this can tip the scales, and delicacy is usually trumped by concentration. On a personal level, I thought the St. Innocent was showing great but was not a crowd favorite (truth be told, I think it’s just a pup and needs another year or two to come together). The Nautilus, typical of New Zealand Pinot Noirs, zinged with good firm acidity and in the context of a meal would shine, but this wasn’t a meal. Against the other wines, going back and forth, that acidity became more pronounced. The Drouhin was picked out by the class as the Burgundy (well done, students!) and showed the integration and complexity that seems to always pull us back into that little strip of land called the Cote d’Or. The Drouhin was showing really, really, really well. 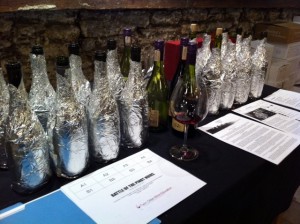 The second flight was a wide variety of prices and vintages, mainly to see if the class showed group preferences or if individual tastes would win the day. Additionally, I wanted to play the whole “is it worth the money?” game, so I threw in a $200 wine from my cellar. Lastly, with the Calera, I wanted to see if a 95 point rated Pinot Noir stole the show.

The Grand Cru Bonnes Mares only got two top votes (one being from me). It was beautiful, haunting, complex beyond belief, and showing its age. The color was advanced with orange and brick hints, and the aromas were of dried fruits, worn leather, bay leaves, and spicebox. The mouthfeel was long, gorgeous  and complex. But here’s the kicker: in the blind line-up the other wines stole the spotlight. It’s like having a deep intellectual and enjoyable conversation with a new friend at a party, when suddenly the funny guy (a bit drunk) comes into the room and shifts all the energy. Know what I mean? The context of a blind tasting was not where that Bonnes Mares belonged, but in order to learn this, it had to be there. Does that make sense?

The other three wines ran neck and neck for the top spot by crowd votes. This was interesting to see, for the individual preferences of the students showed through. Those that wanted more compost and dirt aromas picked the Matrot Bourgogne (which is showing incredibly well right now for such a young and low priced wine. I’m going to seek out lots of this for my cellar). Those that wanted more power and concentration went toward the Calera Mills Vineyard, which was scored 95 points in Wine Advocate. (Don’t get me wrong when I say power and concentration … this isn’t Zinfandel or Syrah we’re talking about here. Power and concentration in Pinot Noir is more about firmness and youthful energy. The Calera had balance and elegance, but also attitude galore and needs a few years to settle down).

This brings us to the Evesham Wood, which all things considered (price, age, provenance, etc.) put it on the top of the heap. It has had enough time to settle down and unwind a bit (Pinot often goes ‘dumb’ around 3-7 years of age from the vintage), but still has years of solid giving ahead of it. This was made by Evesham Wood’s founder, who has since sold the property (the new wines are different in personality but equal in quality), further accenting my point: the context of that wine made it taste different to me, knowing there is now one less bottle in the world that was made by the legendary Russ Raney. A wine of historical importance (even if it’s just $50 a bottle) should not need to prove itself against others in a blind tasting. It should be considered carefully on its own.

Sometimes, it’s not who wins the race. The point is that it’s not a race at all.