Welcome new readers who found me through the Terroirist’s daily email! I focus on events, tastings, and goings-on in the Twin Cities area, but if you want to read more of my “for the rest of the world” stuff check out the Vino Manifesto and my work at The Wine Company’s blog.

What is the best wine you’ve ever had? In August I wrote a short blog post about this question, exploring the fact that context can shape the memory of a wine as much as quality. When a great wine (a term I don’t use loosely) combines with a great experience, the magic can happen.

In the post exploring what a ‘best wine’ is, I never do answer the question myself, so I figured I’ll do my best to answer it here. Below are the five best wines I’ve ever had in my life (in no particular order). My personal definition of what makes for a ‘best wine’ tends to be more specific to the situation rather than the quality of the wine itself (though to make this list it has to be damn good). Many of these are older wines or not readily available, and some of them were tasted years ago … in other words this has nothing to do with “Five wine I think you’d love” but rather “Five wines that moved me and shaped my life.”

(Note: Read the descriptions I give and you’ll understand why these choices are more about the occasion and less about trying to smell hedonistic raspberry in the glass.) 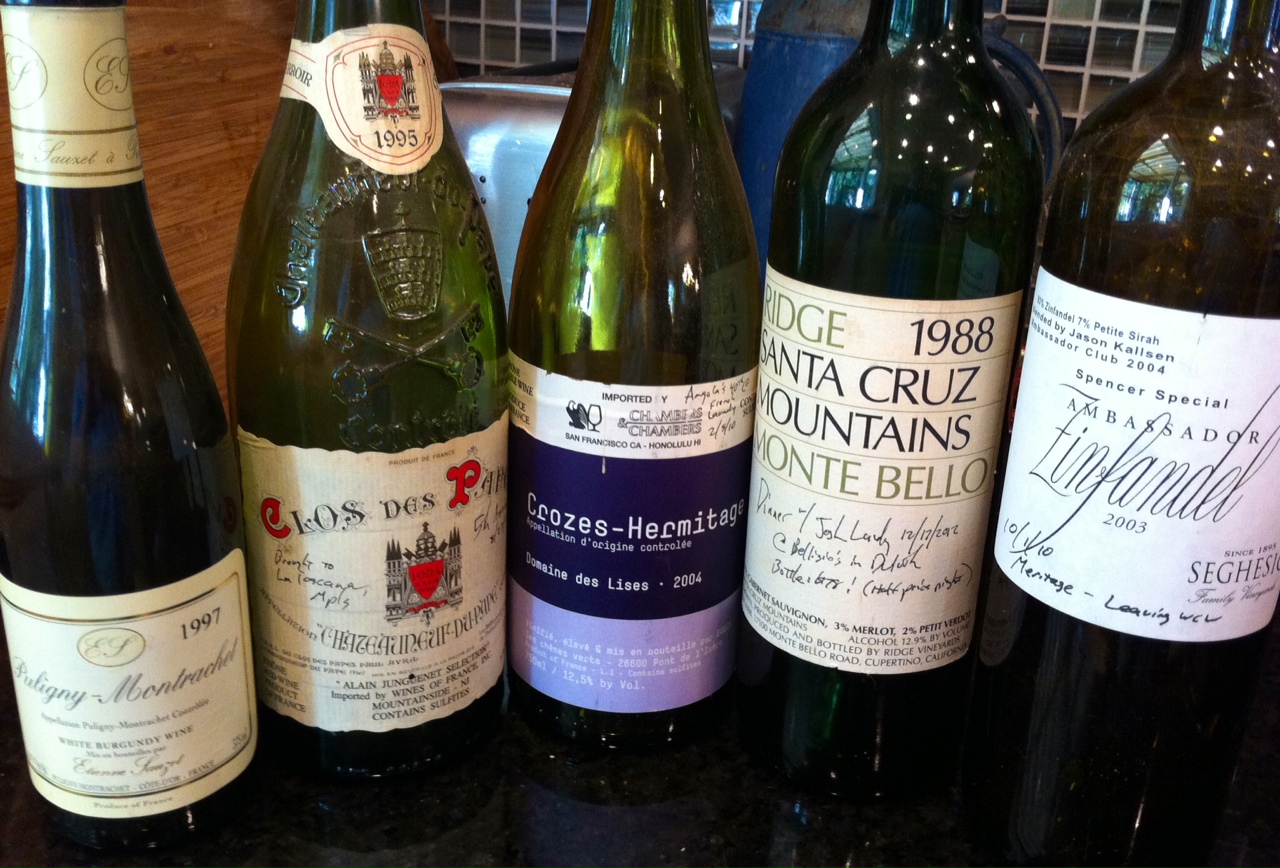 Going left to right (I save special bottles after I’m done with them, and put them in the rafters of my garage … that’s how I could make this photograph.)

1997 Etienne Sauzet Puligny-Montrachet 375ml. Not a great vintage in Burgundy, but I didn’t care. When I saw it on the wine list I had to have it. We (my wife Angela and I) were at Chandon’s Etoile Restaurant in Yountville, California for her 30th birthday in February of 2000. It was our first trip to wine country, though I had been working at Surdyk’s as a wine consultant for over three years. It was the trip that solidified for me that I chose a great career path. Angela had an all day spa treatment (while I hit about ten tasting rooms) and looked ravishing. But we were “Napa-ed out” on Chardonnay. I wanted acidity and brightness instead of heavy oak. We saw this on the list, ordered it, and immediately the Sommelier was at our table thanking us for ordering “the gem of the selections … you have no idea how hard it is to sell Burgundy when you’re in Napa Valley.” I clearly remember having scallops with a blood orange sauce and the wine was the perfect pairing.

1995 Clos de Papes Chateauneuf du Pape. This bottle is special for three reasons. 1) It was the first really really really good bottle I bought at Surdyk’s when I started working there. It was $40 which was more money at the time than I should’ve spent, but I bought it and adjusted that month’s budget. I stashed it in our basement and it basically started our wine cellar. 2) We saved it for all of a couple of years (patience is not a virtue of mine), and decided to pop it for our fifth anniversary on August 27th, 1999. By that time we had a few more pennies in the bank and decided to go out to eat, to La Toscana in Minneapolis. I called and asked for the wine manager to confirm corkage, and he said “Well, $15. Or free if you give me a taste.” 3) I met the wine manager later that evening and gave him a taste, a man by the name of Wil Bailey. Fast forward fourteen years and Wil and I work side by side at The Wine Company. It makes the memory of the wine even better!

2004 Domaine des Lises Crozes-Hermitage. So as you read with the Puligny-Montrachet, we were in Yountville for dinner celebrating Angela’s 30th birthday in 2000. We returned to Yountville ten years later to the day, for her 40th birthday in February of 2010, when we had lunch with our son Spencer at The French Laundry. Every wine list has a bargain (I firmly believe this), and it took about fifteen minutes but finally I found it: the gem of Maxime Graillot, son of Alain Graillot, from the Domaine de Lises Crozes-Hermitage. A stunning wine through and through, simply one of the best Syrahs I’ve ever had, and especially important to our family for it was Alain Graillot himself who poured the first glass of wine for our son when we visited his estate in 2007. Raising a glass to fine memories, we savored every drop of his son’s wine.

1988 Ridge Monte Bello. I enjoyed this with my friend and co-worker Josh Landy this on a freezing cold December night in 2012, in Duluth at Bellisio’s Restaurant. Every Monday night at Bellisio’s is half price wine night, and there are many gems to be found in their book including this. Honestly, I hesitate to tell you because I want to save every last bottle for myself. Possibly the best wine made in California, period. Age-worthy as a tortoise. Twenty five years is idea. The retail price of this wine would normally be about $300 if you could find it. I won’t tell you how much it is on Mondays at this restaurant, but it’s under $100. I suggest bringing some Riedel Cabernet stemware to enjoy it to perfection. Oh my god that wine was good. It also goes to show that to make the list of “best wines ever” price is a consideration. If I paid $300 for the bottle it would have been the same juice, but harder to enjoy.

2003 Seghesio Ambassador Cuvee “Spencer Special.” I was lucky enough to sell the wines of the Seghesio family from 2001 to 2010. Pete and Cathy Seghesio are the real deal, just incredible people, and even though they sold their winery I still support it because Pete has asked me to (I have not yet noticed a change in style of the wines, but I’ll be the first to let you know when I sense it … Ted Seghesio is still making the wines so even though the family doesn’t own it the wines are still stellar). In 2003 I was part of the small club of Seghesio “Ambassadors” that sold the most of their wines nationally in 2002. This small group went to California and dived head first into the world of the Seghesios, making sausage with Ed and Pete Sr. (RIP), pruning vines with cousin Jimmy, cooking ragu with Rachel Ann (RIP), and best of all blending our own cuvee of Zinfandel and Petite Sirah with Ted. My blend became known as the “Spencer Special” in hommage to my son, and when the wine arrived a year later it became the rarest Seghesio wine in all of Minnesota (only 12 bottles made). Fast forward to 2010, and I left my job at World Class Wines, and in celebration (or maybe to forget the fact I had no job or plan of what to do) we popped this bottle at Meritage and raised a glass.