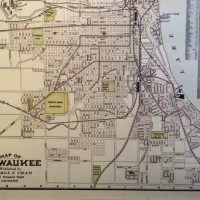 By Jason Kallsen on February 7, 2014 in The inside scoop, Wine thoughts

I just returned from a whirlwind weekend in Milwaukee with my son to see a concert. Being in a city for only 24 hours, along with being a wine and food lover, causes a person to visit a huge number of places, never staying for more than one quick drink or one quick bite. All in all, we patronized about 15 restaurants, wine bars, and food retailers.

What stood out relatively quickly is just how different the food and wine scene is in Milwaukee, and how they have certain things that we simply do not have here in MSP. Here is my short list, along with (where appropriate) ideas on remedying the situation.

What MKE has that MSP does not number one: Wine in grocery stores

My regular first stop when arriving in the city is the Milwaukee Public Market. It’s the best place to stretch your road-wary legs and enjoy some great wine, beer, and food in a fun atmosphere. It’s much like the feeling that the Midtown Global Market is trying hard to achieve: a bustling crowd, interesting vendors, a wide variety of local produce and meat. Where the Midtown Global Market is in some ways too diverse for its own good, the Milwaukee Public Market is perhaps a bit too homogenous in selections but whatever they are doing they are doing it right because every time I’ve been there it’s busy. (This has not always been the case. The first few years for the MPM was difficult to say the least, but is now thriving.)

After having oysters at the St. Paul Oyster Bar (I love the irony of driving from my hometown to sit at a bar of the same name), along with some great calamari (my son ate two orders), we wandered a few stalls down to Nehring’s Family Market. An incredible meat selection was in the case, and wandering around the corner we came across the charcuterie, wine, and beer cooler. Walking in, for a Minnesotan, is a strange feeling for we are still not used to the idea of being able to buy food alongside bottles of wine. The whole wine in grocery stores debate in Minnesota is an ongoing one, but I have to say it was a breath of fresh air to pick out some salami along with a bottle of local brew and some Chardonnay.

Now the whole debate about wine in grocery stores (or any discussion around any of Minnesota’s liquor laws) is worthy of far more than a part of a blog post, and honestly I haven’t figured out where I stand on it. What I don’t want is selection to be compromised by large grocery chains and large distributors having amplified power. What I don’t want is anything that would deflate our vibrant and varied wine scene. But I gotta say accessing artisan food products along side artisan wines is pretty cool.

The lobbying power behind getting wine in grocery stores is based on big box money and mentalities. It’s about opening the floodgates to the likes of CVS Pharmacy and even gas stations being able to sell wine and liquor, along with the monstrous power of the largest grocery chains.

But here’s an idea: rather than opening the floodgates and quickly seeing Target and Cub and Rainbow reconfigure their floor plans, how about this: allow current liquor retail license holders to have up to 100 square feet for food. It would be voluntary, of course, and it would have to pass food grade inspection, of course, but it would suddenly open up the possibility of expanding the world of artisan products without selling out to the mega-boxes. It would keep a tsunami of Smoking Loon and Yellow Tail from overwhelming the seven county metro area.

Interestingly, this idea is by no means new. First Grand Avenue Liquors and Haskell’s in Saint Paul have such a permit. But because the consumer is not used to this combo of picking up some cool products along with some great wines, it’s not a big driver or moneymaker (and in the case of First Grand, not even used).

What MKE has that MSP does not number two: True wine bars 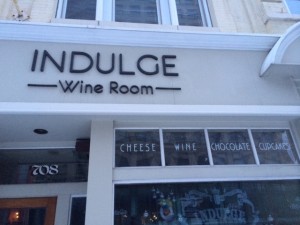 Why can’t a wine guru in the Twin Cities take one of the many small storefronts on Central Avenue or East Lake Street and open up the wine bar of their dreams? A place where the community can walk to, have a glass of great wine, a plate of cheese or some cured meats if they wish, maybe a bit of dessert, then walk home? Because unless you charge way too much for your food (or way too little for your wine), it would be illegal.

In the Twin Cities, a minimum percentage of sales for an on-premise license (a restaurant) must be food, with the idea being that we’re saving the world from drunk drivers tumbling out of bars with bellies full of Burgundy. For most licenses, this amount is 60% but some areas enforce the amount to 70%.

Common throughout Milwaukee (along with the hipster paradise of Portland, Oregon as well as Seattle and San Francisco), true wine bars exist. By ‘true wine bar’ I mean a place where wine comes first, where proper stemware is used, where the list of wines by the glass are long and interesting, and food is simply a little add-on to the night. It’s a place that does not need a hood vent or a tattooed chef adding foam reductions to four day braised lamb. Most importantly, it’s a place where a person ordering a fifteen dollar glass of wine with a ten dollar plate of cheese is not threatening the future existence of that restaurant.

The closest that we have in MSP to a true wine bar is Toast, which I love dearly. As Toast we being constructed, owner Scott Davis was stopped in his tracks (this after signing his lease and getting the thumbs up by the inspectors) when the city suddenly said “You can’t install a hood vent in this building! It’s historic!” What to do? Get a rapid fire pizza oven and dive deep into cheeses and charcuterie. Fast forward a few years and when the Great Recession hit hard, foodies from all over descended on Toast for a budget meal. It’s the closest we have to my definition of a true wine bar in the Twin Cities.

So here’s a solution: change the law. There was a movement afoot last year pushing for this change, and if it were to happen we would see a boom of wine bar development similar to the craft beer taproom movement — which nobody can say has been a bad thing. (A point of irony: a taproom in Minneapolis doesn’t need to serve food, but a wine bar does.)

Ironically, I wrote the first draft of this post in Sparrow Cafe at the corner of 50th and Penn, awaiting Terzo Wine Bar to open next door and to have a glass with Charlie Broder. Hanging on the wall was a plea to sign a new petition directed at this exact same subject. Apparently Molly Broder and Steven Brown (of Tilia) are organizing people behind this. Look for more info on this very important subject coming soon.

What MKE has that MSP does not number three:  presence of local wines 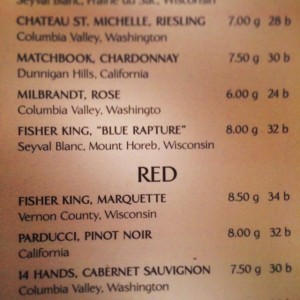 (I admit that the photo was taken at Avenue Cafe in Madison, but menus of this type were a common sight throughout Milwaukee as well.)

Locally sourced. We know our farmers (here’s the long list). Our food traveled by car, not semi. Know your purveyor. These are things we hear often when dining at our best local restaurants. Even the laziest foodie can rattle off the top suppliers: Callister Farms, Thousand Hills Beef, Star Thrower Farms, and many more.

So why is it so hard to get a glass of Minnesota wine in the Twin Cities?

As I’ve written, the wines of Minnesota are getting better and better, to the point where they are no longer simply curiosities for visiting relatives but rather legitimate drinks to pair with our local foods. There is international attention paid to our Cold Climate Wine Conference held annually in the Twin Cities. There is interest, there is attention, but it hasn’t quite penetrated to the point where restaurants see representing the wines as viable.

So I’m not sure the Wisconsin produced wines are feeling the love (and selling through) as much as the purveyors would like. There is no way to judge appreciation on just one quick visit to the city. But it was a pleasure to have the option of a local wine on most wine lists, which is more than I can say for many in Minnesota.

Does Milwaukee kick our butt when it comes to wine? I don’t think so. MSP still has an edge when it comes to creative wine lists, restaurant stability, and overall selection in retail shops even when, according to a 2006 in-state audit, wine and beer is more expensive here. But what Milwaukee offers, and what would ignite our local wine scene in a big way, are the items outlined above.

What are your thoughts?