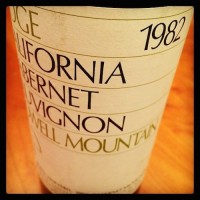 A number of good questions evolved from those events, and looking back at my notes I thought it would be worthwhile to publish some answers. So without further ado …

1) What should you look for when buying an older bottle of wine?
The fill of the wine in the bottle is of prime importance. As a wine ages, there is going to be a natural amount of seepage and evaporation that occurs, but as that fill level goes down from the neck into the shoulder of the bottle, far more oxygen is allowed to come in contact with the wine. So look for bottles with wine at least at the top of the shoulder, if not in the neck. 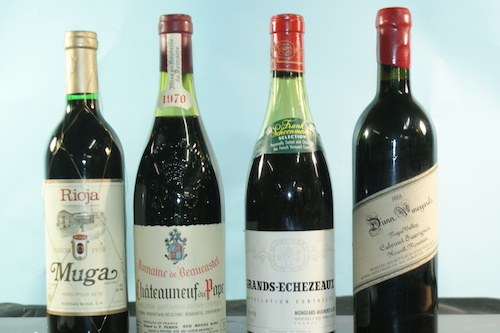 These are all bottles I was considering buying recently. When spending your hard earned cash on older wine, always request images of the bottles for evaluation. The Muga Rioja 1970 here is in PERFECT condition with a great fill. The Beaucastel 1970 is showing quite well — at this angle, one of the best 1970 Chateauneuf I’ve personally ever seen. The Mongeard-Mugernet Grands-Echezeaux is too low for me to consider. The 1988 Dunn Howell Mountain looks spectacular.

A very important thing to do is look for seepage or leakage under the capsule. A little bit of seepage is not the end of the world by any means (and often the seepage seals itself up). Particularly for older bottles of sweet wine, it is quite common for a drip or two of wine to be under the capsule. Ideally, the capsule can still spin, indicating no leakage at all.

Check out the top of the capsule — is it extracted? If the cork is pushed up a bit, or it looks like it was up once and was forced back down, it could be a sign of improper storage or being in an environment too hot or too cold for it (as in extreme heat or extreme cold). This is a bad sign, for even one day at such extremes can permanently hurt a wine.

The capsules of the 1970 Chateauneuf and 1970 Grands-Echezeaux showed evidence of corks being pushed back in, so I declined to buy them.

2) What’s the best procedure for decanting an older bottle?
Decanting a wine is done for two reasons. The first, with younger wines, is to get some oxygen moving in the wine and releasing the aromas. At my day job at The Wine Company, we did a huge decanting experiment and found two hours for a young wine to be a ‘sweet spot’.

However, for older wines the goal is to keep the excessive amount of solids that form over time from getting into your glass. This is why an older bottle should stand up for a week or so before opening it carefully, so the solids can settle on the bottom.

Here is the critical point: if you’re decanting an older bottle to separate out the sediments do NOT do it until you are ready to serve the wine. The older or more fragile the wine is, the faster it will oxidize in your glass. It’s amazing how many old wines will smell and taste great for as little as 15 minutes after opening, only to fall over dead with the next sip. One of the saddest days of my wine life was when an acquaintance invited me to a tasting where a fifty year old bottle of Burgundy was going to be had. I arrived and spotted a full decanter on the table. In response to my stunned look he said, “Yeah, I got that baby open and breathing about five hours ago!” Needless to say, the wine was shot.

I have an older bottle at home in the basement. Is it still good?
There is no way to know until you pop it. There is a saying in the wine biz that after a certain time there is no such thing as a great vintage, only great bottles. How it was shipped, how it was stored, how it is served, all play crucial roles in the end result. But I’ll repeat: you’ll never know until you try. So pop that bottle!

What’s the next class feature rare and old bottles of wine?
The older Ridge bottles you see below will be opened for a class soon. I’m also accumulating a collection of older Jordan Cabernets and wines from Dunn Vineyards to open the Fall of 2014. 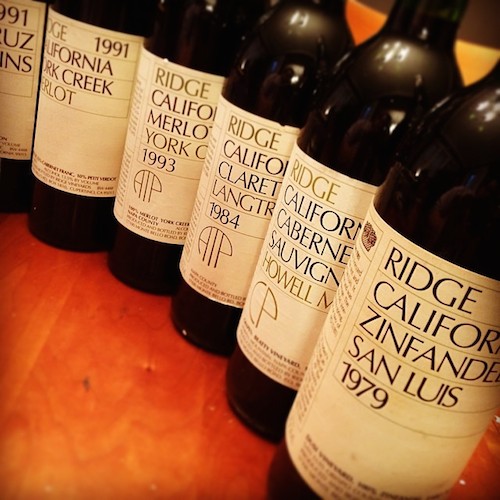