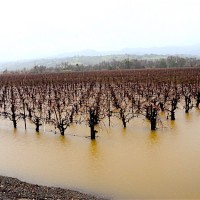 Last December, anticipating a long, cold, snowy winter, Angela and I bought tickets for San Francisco to escape up to Napa and Sonoma for a few days in February.

We landed on Wednesday the 15th of February and returned the following Monday. Yes, we missed out on a 60+ degree weekend in the Twin Cities, instead having to endure 45 degrees and rain in wine country. But you know what? We were in Napa and Sonoma, so it was okay.

Here’s a quick summary of some of the things we did, saw, and tasted.

The impact of the floods
Rain, rain, and more rain. After five years of serious drought, the rain is coming at just the right time. Sometimes too much rain, and the possible failure of the dam near Sacramento was on everybody’s lips. In terms of the wine world, and Napa and Sonoma in particular, they are as happy as can be. Cover crops are growing in a super healthy way, the vines are dormant but the root systems are finally getting a drink, and local aquifers are filling up. Check out dramatic video of the reservoir just east of Napa Valley: for the first time in years the overflow spillway tunnel is in use. Standing water was in many vineyards, but the Russian River and the creeks were not overflowing on our trip (they were seven days before, but had since gone down). We took the time to explore the fish hatchery on the north end of Dry Creek Valley, and the coho salmon and steelhead trout were running full tilt up Dry Creek, and you can see the monster fish jumping up the ladder at the hatchery. I’ve never seen that before and it was awesome … next time you’re in Dry Creek Valley take a moment to visit Warm Springs Fish Hatchery, just two minutes away from Ferrari Carano winery.

The buzz of the 2016 vintage
Many are already calling it the greatest vintage ever in both Napa and Sonoma. Perfect weather, lower yields, stressed vines making incredible fruit. This is on the heels of amazing 2012, 2013, 2014, and 2015 vintages. We are in an amazing moment for California wine drinkers.

A few of the wineries we visited
We were there on business, of course, but we didn’t pack our schedules as tightly as we normally would. We aimed for longer visits to select properties mainly to taste barrel samples and get a bead on the 2015 and 2016 vintages.

Alexander Valley Vineyards: continued improvement on all wines, which have been above average for the last five years or so. These are great wines at perfect and reasonable prices. Their Cabernet and Merlot programs are particularly good, the Zinfandels are polished and delicious, and we learned that Pinot Noir can indeed be grown successfully in Alexander Valley if you plant your vines in certain pockets near the Russian River.

Failla: one of the top winery visits we have ever experienced. Located on Silverado Trail toward Calistoga, the wines of Ehern Jordan are sublime and seductive. Some of the best in California at the moment. No wonder he was featured in a 2015 Wine Spectator article.

Chappellet: Angela had never been up to Pritchard Hill, so we wound our way up to 2000 feet above Napa Valley to catch up with winemaker Phil Titus, who I haven’t tasted with in over 15 years. Massive investment is happening at this legendary property (the second winery to open up after Prohibition, after Mondavi) and the wines are better than ever. The Pritchard Hill Caberent Franc is one of the best representations of that grape that I’ve ever had.

LIOCO: I finally met Matt Licklider, the other half of the founding team of LIOCO (I’ve had many a drink with his business partner, Kevin O’Connor, over the years). We tasted through a full range of the current releases, plus some library wines including the 2006 Klint Vineyard Pinot Noir, the very first LIOCO wine I ever had. I love what these guys are doing and many of you know how much I like to support them. I’m putting together an order of single vineyard wines from them for a LIOCO class this summer or fall. Stay tuned.

Ridge: No trip to Sonoma is complete without stopping at the Lytton Springs property of my favorite winery in America. The tasting room was packed but the staff was super accommodating, allowing us to hole up at the tasting bar and rifle through current and past releases. The quality from the old vineyards they farm has been steady during the drought, but the rain is allowing them to breathe a big sigh of relief. We procured a wide range of library wines from them, and look forward to presenting them in an upcoming class.

OTHER HIGHLIGHTS
Healdsburg SHED: A must stop destination, and the Spanish sardine appetizer was the highlight food of the trip. I’m still dreaming about it.

Bergamont Alley: In Healdsburg, just off the square across the street from Willi’s Seafood Bar. Hipster central, with a wide selection of great wines to enjoy with grilled cheese sandwiches. The service is too cool for school style (i.e. you kinda have to work to get your server’s attention) but the quality of the wines and the look/feel of the space makes up for it.

Breakfast at Healdsburg Grill: Nothing better and incredibly affordable.

Calistoga Pottery: We stop here on every trip to catch up with Jeff and Sally, make sure they are doing well, buy some more pottery for the kitchen (we’ve been buying their wares for 17 years now) and get the inside scoop on restaurants to visit. They are always on the front end of what is pure, awesome, and important. Their suggestion for the Napa Valley restaurant of the moment: Two Birds One Stone, by the former chef of the now closed but soon to reopen Cyrus (where I had my favorite dish of all time: the Cyrus Barolo Risotto with White Truffles). Our schedule didn’t allow us to get there, but that just gives us a reason to return soon! Another great reason to go: complimentary corkage on one bottle of wine!

We had the best bread of our lives, thanks to WildFlour, who we happened to drive by one day and couldn’t resist the smell in the air. A must visit if you’re in the extreme end of the Russian River and Green Valley.

Many more notes and photos to share over the coming weeks.

It was a great trip, even though it was sunnier and warmer in the Twin Cities. Go figure. I hope everybody enjoyed the weird warm weekend by popping a bottle of rosé and sitting on the patio!

Where should I buy my wine in the Twin Cities?
Europe, Arizona, or Minnesota: Drink the local juice

One Response to California Dreaming, and the impact of the floods

We will return to in-person classes as soon as we can! We are aiming for summer of 2021, and things are looking good.