The Twin Cities Wine Awards Grand Tasting was all we hoped it would be and more. Last Monday night the best of the local wine scene along with fantastic consumers celebrated, high fived, hugged, and laughed. And it was magical. 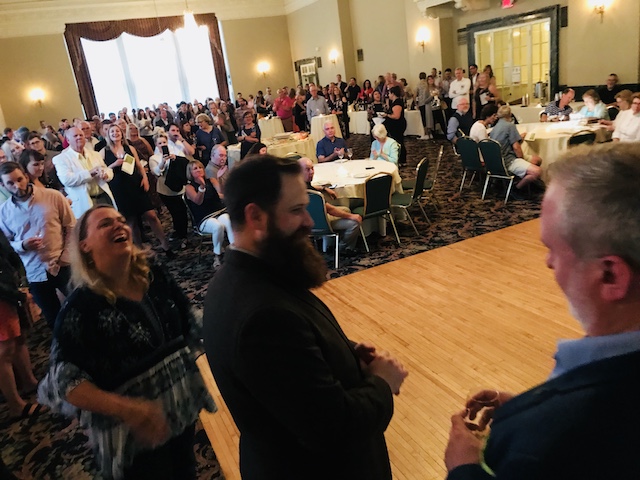 Highlights of the night for me were fourfold: the strength of the wine community, the curiosity of the consumer, the joy of recognition, and the rise of something bigger.

Feeling the strength of our wine community
I’ve often spoken of the magic of the Minnesota market for wine. There are a number of factors that go into this, but what it comes down to is a desire of a core group of importers and wholesalers to find special wines and bring them directly to Minnesota, followed by passionate retailers and restaurants that refuse the easy path and instead support the fun and unknown.

Because we are not an “A” market we have the advantage of not having to play the big game with the big wholesalers in quite the same way as a place like Chicago, Miami, or New York (don’t get me wrong, the ‘big game’ is here as well, just not to the extent of the mega-markets). I travel to Chicago often, and it’s amazing how many restaurants there have basically the same wine lists because of this big company influence.

The kind of wines enjoyed Monday evening are the ones that keep our scene vibrant, progressive, and on the cutting edge.

I recently bumped into a well-known Sommelier from Chicago quietly dining at one of our local hot spots, with four glasses in front of her and a notebook open. “What are you doing in the Twin Cities?” I asked. Her answer was telling.

“Research. You have things we don’t.”

Feeling the curiosity of our local consumers
For many of the consumers at the Grand Tasting, it was an eye-opening event because of the wines being served. Each table self-selected their theme. Some went with “Minnesota connected wineries.” Some went for “Our Italian Imports” or “Under the radar southern hemisphere.” But the one I heard the most about was the table with a relatively new wholesaler named Rue 38, who presented “Wines of the old, old, old world” featuring the following:

Huh? What you’re looking at is a list of awesome wines from Greece, Serbia, and the Republic of Georgia. At another table some top grade wines from Lebanon were making a splash.

What was great to see was the curiosity of the crowd. Everybody wanted to try everything they didn’t know anything about.

I love seeing curiosity in wine students. It’s something we try to build into every class. Nobody knows everything, the unknown is where the life energy resides, and anybody who claims they are the best taster around or the one you should really listen to is simply full of crap. Wine is about having the experience and building your own knowledge base, not justifying somebody else’s ego.

Feeling the joy of recognition
Everybody who won in the Wine Awards deserved it. No question, no doubt. It meant so much to be able to cheer for those that work their butts off to bring wine joy to our lives.

Especially poignant was the first annual Raise a Glass Award, which we will give every year to one individual who has helped shape our local wine scene like no other. There was no doubt who the first recipient should be: Annette Peters, the Wonder Woman of Wine, founder of Domaine and Appellations Imports, who has touched every single person in the local wine scene over the last three decades with her integrity, passion, and support of everything good in the world of wine. Congrats, Annette!

Lastly, feeling the rise of something bigger than what I expected
I don’t know how to write this because it’s an unresolved thought and emotion. But I’ve heard from others that felt it.

Something was in the air. Something about Monday night was elevated.

I don’t know what it was exactly but stay with me here. The combination of the best locally owned wholesalers and importers (all of them passionate about wine to the core of their essence), plus the best of the retail and restaurant scene, combined with curious and incredible consumers, made for a mix that hasn’t been felt before.

Maybe it was what was lacking that made this impression. No corporate sponsorship. No big name logos. No banners. No massive brands. No Barcardi girls. No enormous and featureless wholesalers or retailers. No sales pitch. No negativity. No posturing with scores, ratings, or blowhard declarations by people that don’t know any better.

There was no … how else do you say it? … bullshit.

That’s what was the best about the Grand Tasting. We shall do it again next year, even bigger and better!