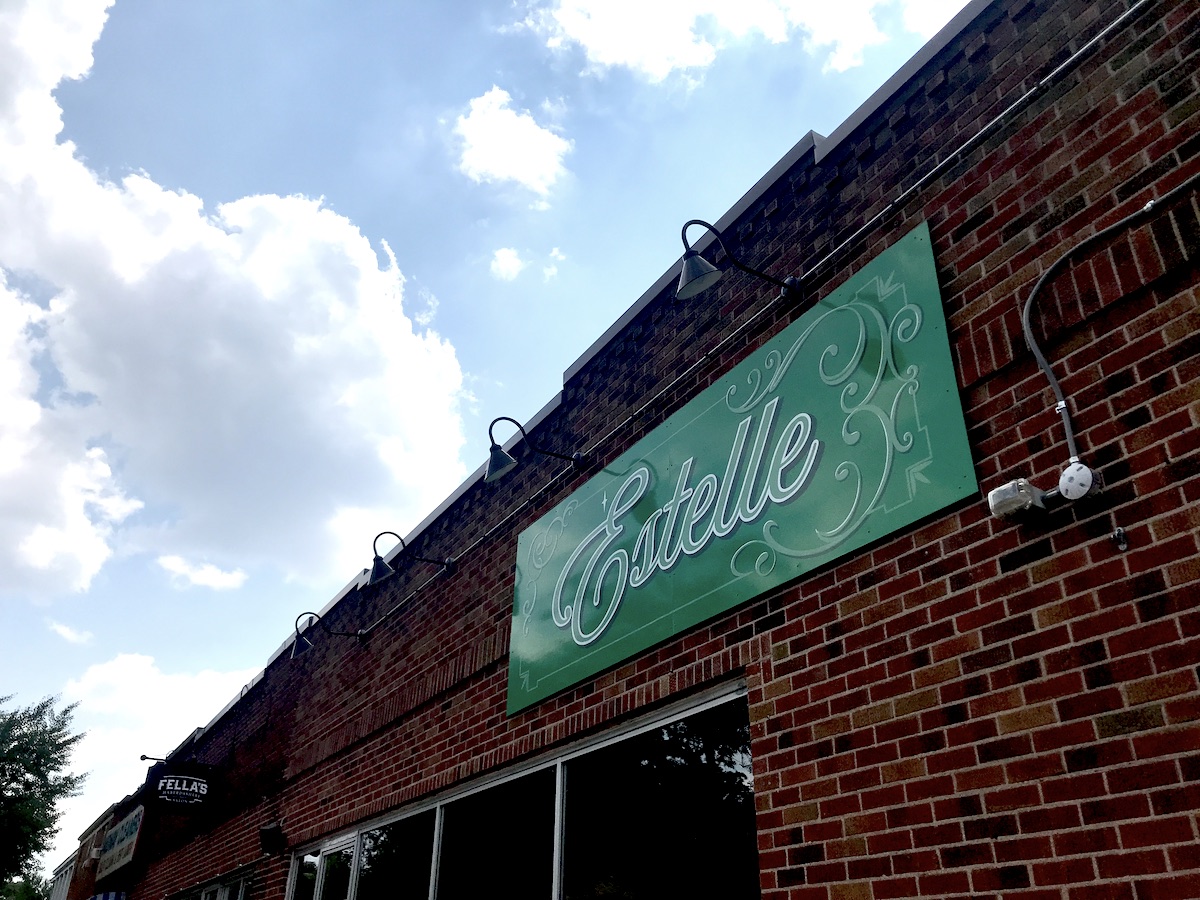 Angela and I don’t eat out every much, which surprises a lot of people when they hear me say it.

And I’m not just talking about during the pandemic (we went to one restaurant for one lunch between March 2020 and May 2021).

In general, we stay in. We’re introverts and really good cooks, we obviously have lots of wine in our house, plus we’re pretty frugal, which all adds up to “let’s stay in and watch a movie with dinner.”

So nowadays it’s a rare moment that we decide, on a whim, to stop at a great restaurant in the middle of the week for a couple of glasses of wine and maybe a bite to eat. Last night we were out for a walk on a beautiful summer evening, and found ourselves walking up to Saint Clair and Fairview, where the gem of a restaurant called Estelle is located.

It’s so nice to see that Estelle has survived. And they look to be thriving, with a full house of reservations every night from opening to closing. Angela and I didn’t have reservations, and we always prefer to sit at the bar anyway (not just at Estelle, but anywhere), so we cozied up to enjoy our first dinner out (in town) in over a year. 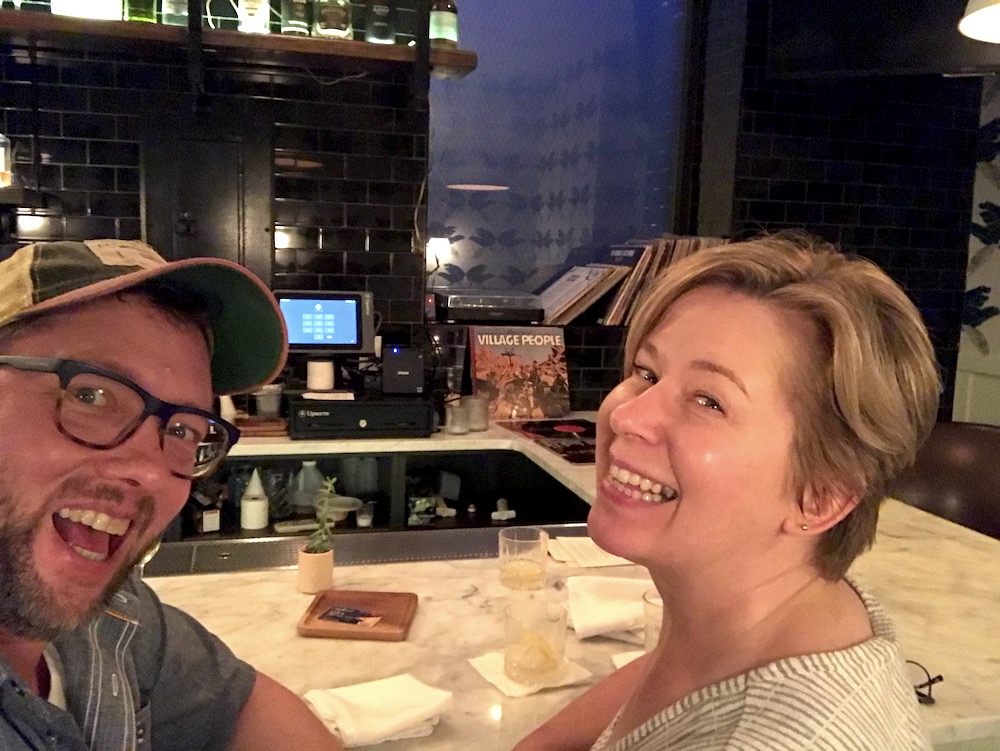 The food at Estelle

We only had a few dishes (split a Restaurant Week menu … we were nibbling at home before we left) but it reminded me of why eating out at a great restaurant can be so much fun. We started with the Gem Salad (chicken, avocado, mojo verde, feta, radish, cilantro, olives, sesame seeds), which was, I kid you not, the best salad I’ve ever had in my entire life. The Restaurant Week portion was about half the normal size, which means the normal size is enough for an entree and still taking some home for a full meal the next day.

What I really want you to know about: the wine list at Estelle

Pre-pandemic I had mentioned this in our newsletter, and I’m happy to report the same thing here with the new post-pandemic list: the wine by the glass list at Estelle is the model every other restaurant should use. It’s priced well, it’s curated, it’s paired to the cuisine, and it takes the customer on a journey.

Nine whites by the glass, nine reds by the glass, plus a smattering of sparkling, rosé, and dessert wines BTG as well as lots of bottles. Prices start at $7 a glass and cap out at $12 a glass (which is simply awesome). Carefully picked selections, daring wines, out of the ordinary gems, and not a single wine to simply appeal to the masses (no California Chardonnay here … the Tiefenbrunner Chardonnay, obviously here to appease those that simply say “I’ll have a Chardonnay,” is one of the best on the market for the money, coming from the cool alpine air of Alto Adige, Italy).

Also, as someone who knows these wines and the wholesale pricing, I can tell you Estelle is working on a smaller markup than others. There is huge bang for the buck here. 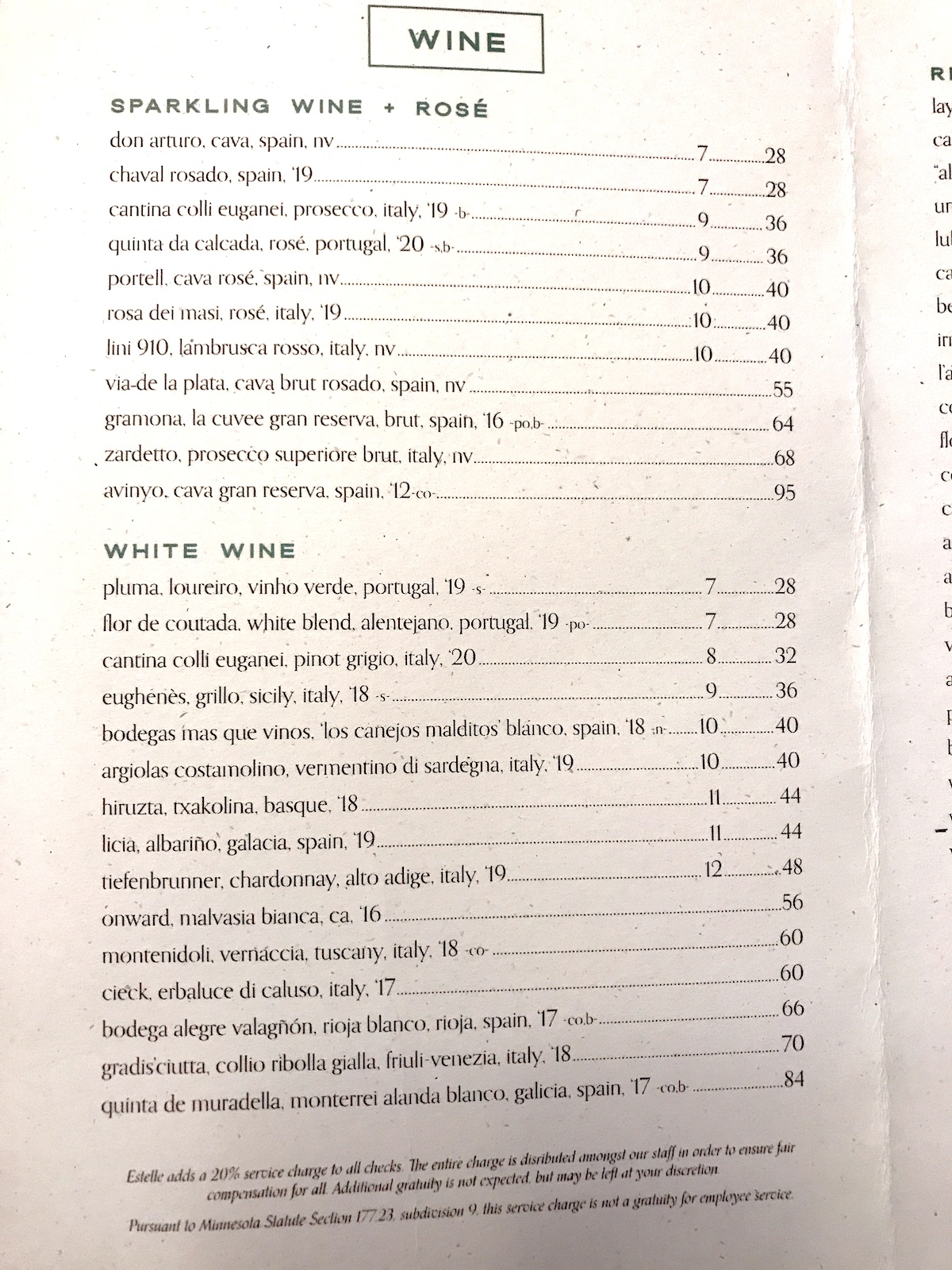 The food at Estelle has big time Portuguese influence, along with a touch of Spanish, Basque, and Italian (southern in particular). The wine list reflects this by sticking with these countries and going for a range of flavor profiles that gives choice to any wine drinker as long as they’re not looking for an oaky chardonnay.

Vermentino, Grillo, Txakolina, Albariño, Montepulciano, Sangiovese, Frapatto (!!), and many more by the glass. The Frappato, which is a Sicilian native variety that is punchy and fresh and squenchy in style, was perfect with the jalapeño pesto pasta. Learn more about Frappato.

Hint: Sicilian food usually has a little heat to it, so any dish with a little spice, paired with almost any native Sicilian variety, will often make for a good pairing. Frappato and mellow spiced dishes is one my favorite things. 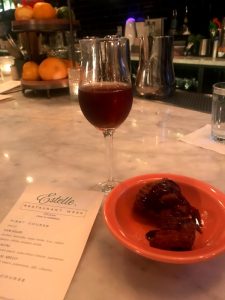 And with the dessert? (Which also came with some dark chocolate churros, in the photo.) I was so happy to see some Blandy’s 5 Year Malmsey Madiera on the list, and have it served to me with a slight chill. As the wine warmed up and I took ever smaller bites of the dessert to stretch out the fun, I had what we refer to as a Food Moment, the first in over two years, when the world stops spinning, all worries are gone, and it’s just me, the wine, and the awesome dish that I never want to end.

Thank you, Estelle! We will be back!