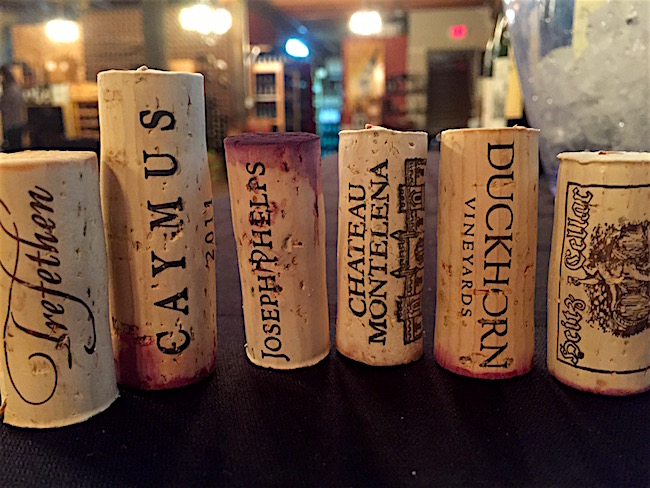 A question that comes up regularly during the Ultimate Intro to Wine classes is that of ‘corked’ bottles of wine: what’s it all about, how do you identify a corked bottle, and most importantly: what do you do if you experience one (at a restaurant or at home)?

These are important questions, for the ordering and “checking the wine for corkiness” of the wine is where much anxiety is felt. With a bit of knowledge, it’s no problems at all.

This guide will outline all of these questions and give you clear answers.

You’re nervous. You’re out for dinner with the boss and her husband. You’re in line for a promotion and you don’t want to screw anything up. The waiter comes with the menus and the wine list. Menus are handed out. The wine list is presented to your boss, who defers it to you. “Why don’t you pick out the wine tonight?”

Clammy hands. A bit of sweat. You open the wine list and start scanning the offerings, quickly doing the math in your head: how much will dinner cost? What’s an appropriate priced bottle? (Hint: the two great all-purpose red varieties are Pinot Noir and Barbera.) You point to a selection “We’ll have this one.”

The server returns, and the ritual begins. Here’s what happens and why:

1) Presentation of the bottle. If you ordered Mouton Cadet, and they bring you Mouton Rothschild, this is the point in which you say “uh, no, I didn’t order the $3000 bottle. I ordered the $30 bottle.” The presentation of the bottle is for you to confirm it’s the wine you ordered, the correct vintage, etc. Don’t be dismissive in this step or you may get stuck with the $3000 bill.

2) The extraction of the cork and the placement of it in front of you (since you’re the one who ordered the wine). The server will take out their wine service tool, cut the foil, and jam it into the cork. If you hear the ‘squeak squeak squeak’ of the corkscrew winding into the cork, that’s a good sign for it means the interior of the cork is dry instead of soaked with wine. Once the cork is extracted it’s placed in front of you for inspection. Grab the cork and feel it. It should be firm to the touch, not spongy or soaked. Look for wine marks going all the way up the up the sides to the top of the cork … this is a bad sign and usually means some wine leaked out which means some air got in. If you want to smell the cork that’s fine, but really the cork inspection is all about tactile feeling and looking at it.

3) The presentation of just a little bit of wine for your taste. This is where many people get horribly nervous, thinking some judgement of history is on their shoulders.

Here’s what to do and how to relax: all you are looking for are faults in the wine, and the principal fault is cork taint, which is a bacteria compound that will alter the aroma and taste of the wine in a very bad way.

Cork taint, resulting in what we call a “corked” bottle of wine, can get into a wine in a number of ways but the most common is by hiding out in the billions of capillaries in a natural cork and ‘activating’ when it touches the wine. This is why screwtops are awesome. Think about it: cutting the bark off a tree and jamming it into a bottle as a means of closure is so 18th century. If screwtops were invented in the industrial revolution we wouldn’t be using the old bark-in-a-bottle method. Oh, wait. They were invented in the early 20th century. Goes to show how slow the wine world is to change sometimes.

A bit of wine is poured for you. All eyes are on you. Don’t be nervous. It’s just your boss and your job at the table. 😉

Swirl the wine. Get it up on the sides of the glass. Breathe out and lift the glass to your nose. Deep inhale.

Here’s the big moment: If what you smell, ahead of the fruit, has anything to do with grandma’s wet cardboard collection in her basement, you have a corked bottle of wine.

I point out “ahead of the fruit” because the smell of raspberries or apple or peaches or currant can still be there, but if the leading aroma is musty, dank, basement, or wet newspaper then you could have a corked bottle.

Take a sip. Sometimes corkiness will show on the palate as well, as a muting of the flavors and a sadness in the wine. It won’t hurt you, but the wine is definitely not showing as well as it should.

What if you think you have a corked bottle, but you’re not 100% sure? Do what I do — question it with the server. Smell it again, make a face, and say something to the effect of “I’ve had this wine before and it didn’t smell like this … huh … this might be corked. What do you think?” and hand the glass to them. If they have been trained right (especially by me) they should treat that bottle the same way as if you said your fish doesn’t taste right. Don’t debate. Don’t question. Don’t taste it and disagree. Grab the fish and get it away from the customer.

This cork taint is sometimes extremely prevalent in a wine, and sometimes very subtle. Winemakers and winery owners are freaked out about the latter. If it’s subtle, many people will drink it and simply not like it. Sadly, if you don’t know about what a corked bottle is, odds are good you have consumed a corked bottle without knowing it.

What if you bought a bottle at a shop, took it home, and it was corked?

A few important hints for you.

1) Don’t dump it out. Trying to return an empty bottle claiming it was corked is like eating a whole pizza before calling back and asking for a refund.

2) Write a big “X” on the front label or write “Corked” on the label with a marker. Do this so you or your housemates don’t accidentally recycle the bottle.

3) Don’t form a bad opinion about that producer or that wine based on one corked bottle. This stuff happens. The jury is out on the exact percentage, but somewhere between 2-6% of bottles finished with a natural cork have cork taint. So don’t take it out on the brand that you bought. You can be quite confident the next bottle from them will be fine.

4) Put it in the trunk of your car (otherwise it’s an open bottle and the police won’t like that) and bring it back to your fine local wine retailer where you bought it and simply say “I have a corked bottle of wine to exchange.” Don’t be nervous about this … it happens continuously in the wine world. Your good retailer will simply swap it out for you or let you pick something of equal value, then return the bottle to the wholesaler, who then bills back the winery. The system is incredibly streamlined and efficient.

What if you bought it a long time ago? That’s when things get a little bit dicier. A retailer will have a hard time getting credit from the wholesaler on a three or four (or more) year old bottle of wine, so they don’t have incentive to exchange it other than customer good will. It kinda depends on the producer, the price, and the vintage. If it’s a finer bottle of wine especially from a domestic producer, you can try contacting the producer directly. They may want you to ship the wine to them at your expense, but I’ve heard stories of many people getting corked bottles replaced directly through the winery this way. If the wine is over ten or twenty years old, you’re often out of luck.

In the end, keep in mind corked bottles happen. It has nothing to do with price (a 1990 Burgundy that I paid $200 for and kept in my cellar for six years for a special occasion turned out to be corked … shit happens). It’s simply part of being a wine lover.

More cool links on this topic

Learning to Sniff Out Corked Wine from Food & Wine

There used to be a solution to mild cork taint, which was to put the wine in a decanter with a bit of Saran Wrap brand plastic wrap. The chemical compound on the plastic wrap that would do the trick, PVDC (polyvinylidene chloride), would bind the TCA (corked wine) molecules to the wrap. However, PVDC hasn’t been used in Saran Wrap since 2004.

And finally a great list of 7 Common Wine Faults from the always awesome Wine Folly.