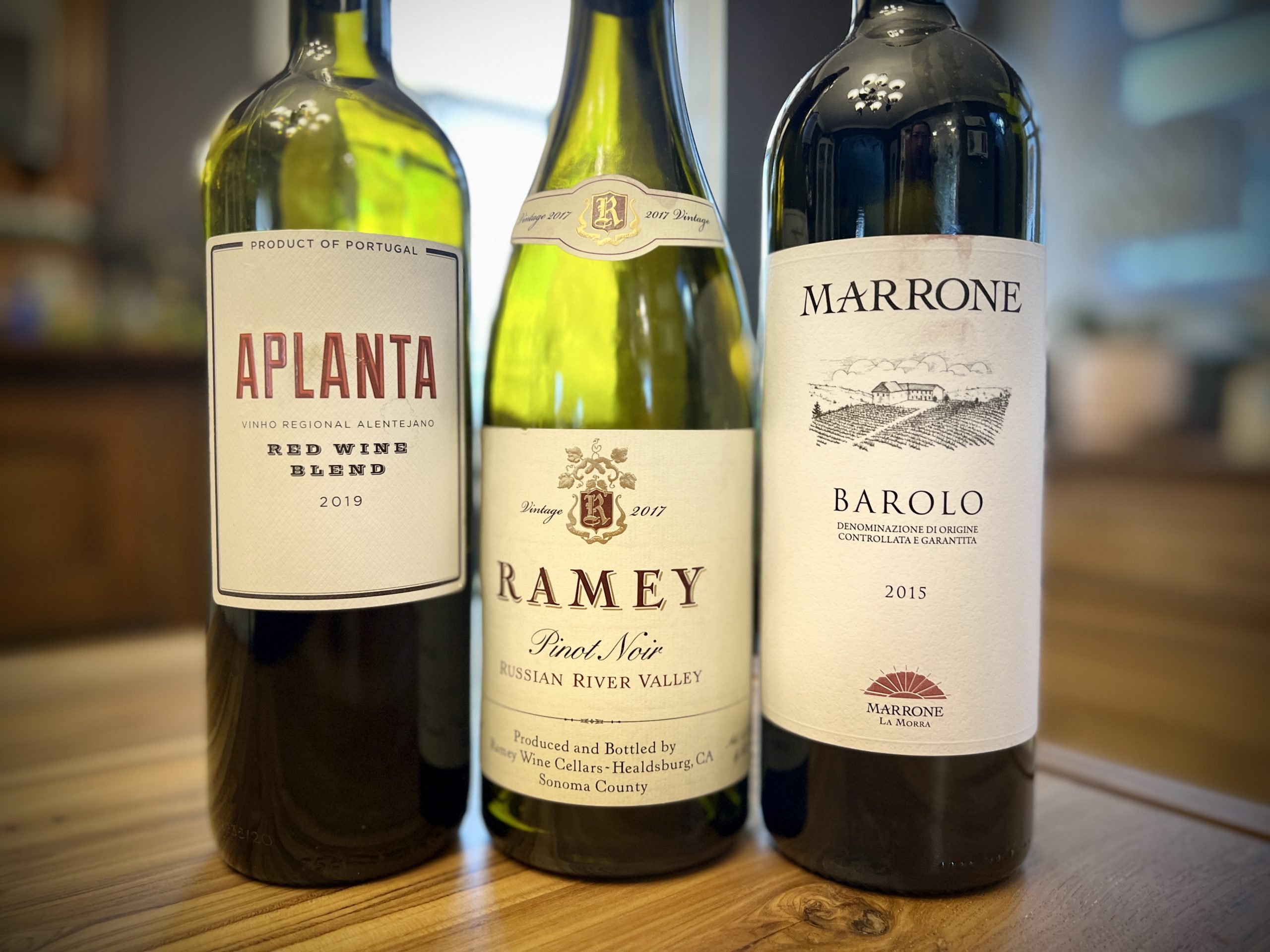 This week we’re keeping it simple, with three wines of outstanding quality including a new weekly category: The Inflation Fighter. Let’s get right to it.

This week’s INFLATION FIGHTER (with an amazing story): Aplanta

The Portuguese region of Alentejo, in the southeast of the country, is an arid land best known for cork trees. In fact, most cork used in the world comes from this area, with the beautiful ancient oaks dotting the hillsides. It’s also an area of amazing wine bargains.

Aplanta comes from a town called Luz (full name: Aldeia da Luz, or the Village of Light). As told by the wine importer, Ole & Obrigato (one of our favorite importers, by the way):

“The Mourão sub-region has no highways or airports, and its people were determined to continue a rustic, agrarian existence until the the finalization of the Alqueva Dam in 2004. A huge and controversial project, the “Barragem do Alqueva” is today the biggest artificial lake in Europe and is a reservoir and irrigation source for a large area of the Alentejo.

When the reservoir was planned the government faced a difficult decision. The old village of Aldeia da Luz (Village of Light) was below the proposed waterline of the planned reservoir, but the benefits that the project would bring were such that the village could not be spared. Would they relocate people to the nearest town? Perhaps disperse the 300-odd residents around the local villages?

After consultation with the villagers the authorities undertook what is considered to be a unique resettlement plan: they rebuilt Luz a couple of kilometers away on higher ground. This relocation included planting both a 200-hectare olive grove and an 83-hectare vineyard that today belong to and are farmed by the 74 permanent denizens of the village. It is from here that the fruit for Aplanta comes, showcasing the lush, warm flavors and easy-going style of Alentejo reds.”

This bargain gem is composed of 80% Aragonez (better known as Tempranillo), and 20% Alicante Bouschet. Perfectly medium bodied, with lush aromas of ripe raspberry, cherry, tobacco, and plum with a bit of a mineral edge. The flavor is joy-inducing, making for a terrifically gulpable wine perfect to pop on a whim and have with a burger or a rack of ribs.

A great wine at this price is getting harder and harder to find. Stock up!

The wholesalers are doing a good job of hunting the corners of the warehouse, looking for boxes with a bit of dust on them, and getting samples to us to taste. There’s a bunch of over the hill wine out there, to be honest with you, but every now and then we hit a jackpot.

One of the wine greats: David Ramey

I first met Ramey in 2004, when he had just left the winemaker position at Chalk Hill winery and started his own label. I worked for the local distributor, so I had the pleasure of sitting in quite a few sales meetings with the man himself.

When David Ramey was in town, everyone on the team wanted to be in that meeting. Few people have the encyclopedic knowledge of Ramey combined with the ability to explain complex winemaking science.

While best known for his Chardonnays and Cabernets, David makes a tiny bit of Pinot Noir as well, and that is what we have here.

The 2017 vintage in Sonoma (and Napa) were defined by the heat of late summer and the fires that began on October 7th. The Russian River Valley, tucked away west of Healdsburg, was spared the smoke of some other regions and being in the fog-swept plains the heat was tempered. I love the vintage myself, though that’s a controversial statement to some. I find the Pinot Noirs of 2017, in general, to be very giving, very complex, and very good.

And especially in the hands of wine Jedi master like David Ramey, the wine can sing!

This wine is drinking perfectly right now, but will age nicely for a few more years (I wouldn’t hold it past 2025). Loads of soft-spiced raspberry fruit, the aroma I look for with Russian River Pinots. Ramey’s wines tend to be seamless, with loads of happy fruit coming at you with wave after wave of taste. This would be an outstanding wine for Thanksgiving or other holiday meals.

While Piedmont is an incredibly old region, Barolo as we know it today is a modern creation. Until the late 1800s, Nebbiolo was fashioned into a sweet red wine. It’s also true that few families in the region have a long winemaking history (and today more and more new money is coming in, with foreign ownership of wineries common).

But Marrone is different. Four generations of farming in the region, going back before Barolo was on the minds of wine lovers worldwide.

Over a century of winemaking: four generations of passion, tenacity, investments and hard work. A story of tradition with a watchful eye on the future. The origins of Agricola Marrone date back to before 1887. A family that cultivated local grape varietals and showed ambition from an early phase.

When Pietro Marrone was born in 1887, his father Edoardo was already producing wines. From the time he was young he was very passionate and ambitious. In 1910, at 23 years old, he asked his father to grow some vineyards.

In the early 1920s/30s the winery progressed and started cultivating vineyards using techniques that were revolutionary at the time: reducing production yields to prioritize higher quality and avoiding sowing wheat between vine rows, a standard practice at the time. An early adoption of what became modern cultivation practices. The family grapes became the most beautiful of the village, so slowly all the vineyards converted to that modern production system.

The grapes for this wine come from my two favorite communes of Barolo: Castiglione Falletto and La Morra. These are regions that produce wines of power, presence, and age-worthiness. Add to that an exceptional vintage, 2015, and we have a winner.

This Barolo, more than many others I’ve had recently, has more “Baroloness” for lack of a better term. The aromas of rose petals and asphalt are strong, with a core of dried red and black fruits that is as enchanting as can be. This is big time wine, a wine with presence, and a wine that is begging to be served with traditional Piedmontese dishes, especially anything involving truffles!

The Aplanta is a stock-up wine. It’s perfect pop-on-a-whim red wine to have on its own or with a simple meal, and it supports an amazing community.

The Ramey Pinot Noir is very special, and anyone who loves Russian River Pinots in particular will get immense joy from this wine. David Ramey’s wines are special indeed.

The Marrone Barolo is serious stuff, capable of aging for another five to ten years (but it’s tasting great right now). If you’re a fan of Barolo this is a great buy at this price.

Thank you, everyone! Have a great Halloween weekend!

NEW! Your payment to Solo Vino for the Friday offer is contained on the order form. No more back-and-forth emailed invoices and payments. Yay!!

This offer is closed. Thank you for your interest.