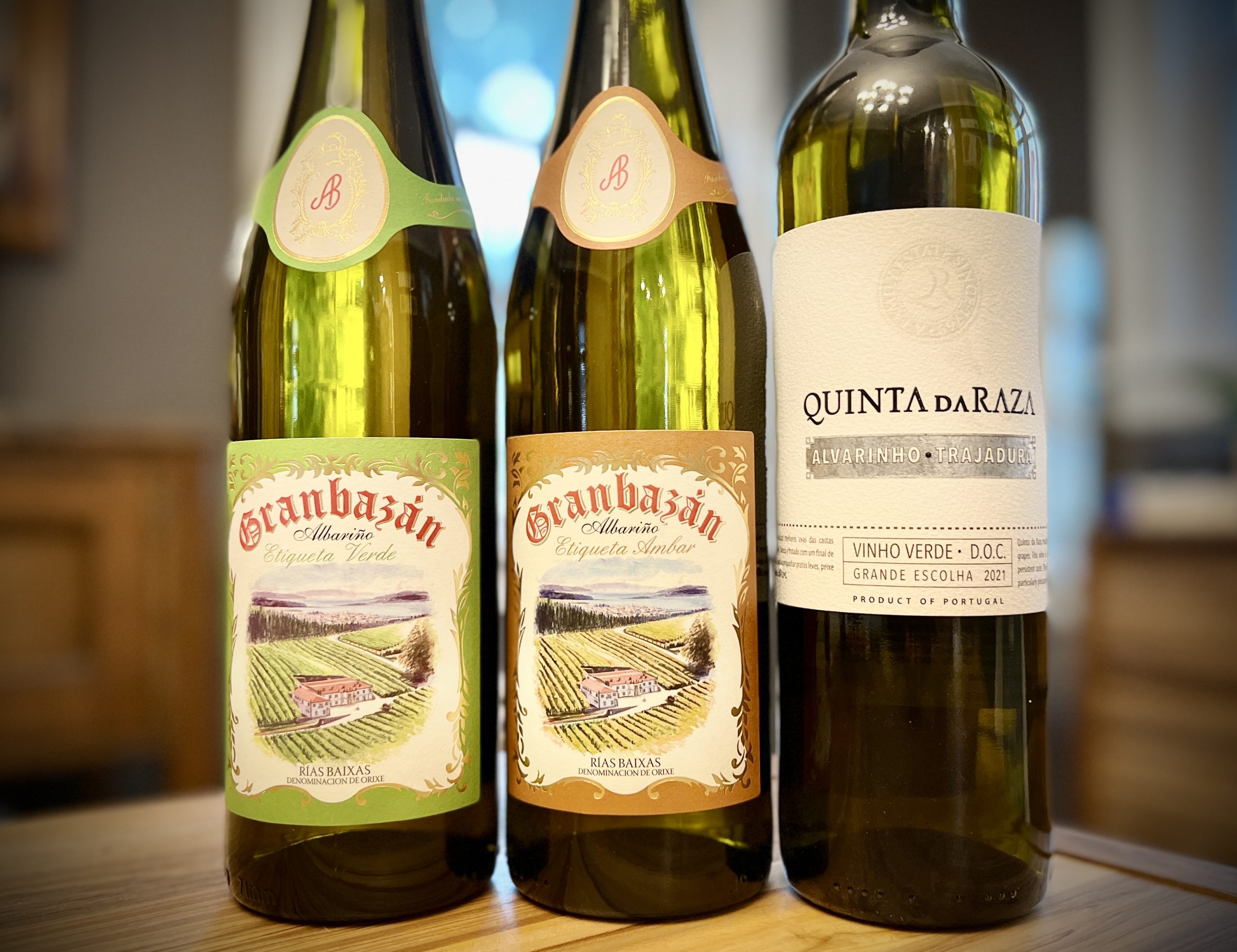 You’ll see the order form at the bottom of this page if the offer is still on. Completed forms are sent to Solo Vino Wine Shop in St. Paul, MN, for final fulfillment (shipping is available).

You say tomāto, and I say tomäto: a brief history and background of Albariño and Alvarinho.

We’re talking about Northern Portgual (Vinho Verde) and far Northwestern Spain (Rias Baixas), regions that are known as “green” because of the lush growth of plants thanks to abundant rainfall. That rainfall results from weather systems in the Pacific slamming into this land mass first, releasing their moisture (the same effect that the coast of Washington and Oregon experiences).

This is not a hospitable environment for grapes. Rot and mildew are a big problem. Few grapes can handle a region like this, but in Europe, they have had thousands of years of grape growing trail-and-error, resulting in the ideal grapes finding their ideal regions.

The Albariño grape took hold in the area (due to its thick skin and ability to repel rot), and when that grape was brought across the border to Portugal, it became Alvarinho.

The farms and farming techniques

This is a region dominated by micro-farms. The average farm/vineyard is around three acres in size, and many families like to grow far more than just grapes. They want crops and livestock, too. Combine the desire for a diverse farm with the humidity and wetness, and what is a farmer to do?

By training the vines upward, the Albariño gets a wind tunnel under the vines, cutting down on moisture and rot and allowing space for more crops to grow under the vines. This way, a family can have a crop of tomatoes, kale, corn, peas, beans, goats, chickens, and vines.

As a result of the small-scale farms, most wines in the region are produced in co-ops. In the past, these co-ops were more about quantity than quality, but that has changed in the last ten years. There has also been a rise in estate production of wine, which all three of these wines represent.

Albariño in the Twin Cities marketplace

When I was a wine consultant for Surdyk’s in the mid-to-late 1990s, the very first Albariños started to arrive in Minnesota. They were variable in quality, even within a vintage. One bottle would be all about apples, the next all about almonds. It was hit or miss.

This may surprise younger wine drinkers, but consistently good whites from Spain and Portugal didn’t really hit the shores of America until the early 2000s.

Albariño in the 1990s and 2000s was not like it is today. It was far more nutty and rich, textural, and just plain big and unwieldy. You never quite knew what you were about to get in a glass.

Everything changed in the mid-2000s, as modern winemaking techniques came to Rias Baixas and Portugal. Temperature-controlled fermentation, cleaner facilities, and a worldwide shift toward quality over quantity changed everything.

We are now experiencing the glory days of Albariño and Alvarinho. And these three wines represent some of the best.

From the awesome folks at WineSearcher:

The variety is high in acidity, and can be produced as a light white wine or in a fuller style, with oak or lees aging adding to the texture and richness. A marine characteristic from the nearby Atlantic ocean is often discernible, sometimes manifesting itself as a slight salinity, which makes Albarino a perfect food wine.

And from the always dependable Wine Folly:

Albariño is a wine that deserves extended sniffing in your glass. It has a dramatic aromatic intensity as a result of the higher levels of two aromatic compound groups called terpenes and thiols. Expect aromas of lemons, limes, pear, grapefruit, honeysuckle, nectarine, and occasionally orange zest and beeswax, supported by subtle smells of freshly wetted granite and Thai basil when sniffing your glass. When you taste Albariño, you’ll instantly delight in its mouth-watering acidity, somewhat weighty mid-palate, saltiness, and long tingly finish that often has a subtle bitter note (almost like grapefruit pith).

My personal take? A great Albariño should show loads of apple-lemon aromas, a touch of marine air, a bit of orange, and a hint of almond. If that sounds like a complex aroma, it is. As they said in Wine Folly, this deserves extended sniffing.

These three wines couldn’t be more different, yet still top-level quality throughout.

“The top Albariño made” is a big statement, for other producers such as Do Ferreiro and Lagar de Cevera are incredibly well regarded. But in my humble opinion, nothing can touch the two wines of Granbazán. If you travel to this region and start asking around at the best restaurants and their sommeliers, you’ll hear the same thing. A few messages sent to friends that live in northwestern Spain confirmed this.

Founded in 1981, Granbazan was the original quality pioneer in the region, the first estate to invest in modern winemaking equipment and trained enologists, the first to use clean, free run juice and cool fermentation to realize the world class potential of the Albariño grape. Today, Granbazan remains ahead of the chasing pack, with its privileged terroir of granite soils planted with mature vines close to the sea, and its continuing commitment to excellence.

So why have you never heard of Granbazán? Because of a series of bad decisions on their part regarding the importation of the wines to the United States. They went with companies that didn’t have skilled salespeople that would take out the wines and tell the stories, and as a result, they had to hopscotch from importer to importer. Each time that happened, excess inventory was sold off quickly to big retailers, and the price integrity of the brand went down the toilet. Correcting a situation like this takes time and also involves pretty much pulling out of distribution for a number of years as the dust settles. They have now landed with one of the top importers around, Europvin, who is also the importer of Vega Sicilia.

The difference between the two? It’s all about the lees.

The “lees” are the spent yeast cells left over after primary fermentation. “Aging on the lees” is something you hear about in Champagne and Muscadet, but it’s pretty common throughout the wine world. When you age the wine on the lees, it develops protein strains as the yeast breaks down in the juice, resulting in a touch of creaminess that can help balance out the high acid in some wines.

When you combine the citrus and apple aromas with the saline minerality of Albariño from Rias Baixas, a bit of lees aging can make some magic happen.

BUT THE BEST PART OF THIS OFFER is that you can buy a bottle of each and learn for yourself what different levels of lees aging will do to a wine.

The Granbazán “Etiqueta Verde” Albariño (“the green label”) is aged for three months on the lees. It’s bright, flashy, alive, racy, and wonderful.

The Granbazán “Etiqueta Amber” Albariño (“the brown label”) is aged for eight months on the lees. It’s rounder, a bit richer, soulful, yet still dancing on the palate.

Which is better? I’ll be honest: I’ve had these wines side-by-side about ten times in the last six months, and the score is 5-5.

And here’s your fun little curveball, and one of the top values in white wine around. Quinta da Raza is our favorite Vinho Verde producer, specializing in site-specific and variety-specific wines (more on those next week). Their top wine, which is one of the great bargains available today, is the Alvarinho-Trajadura blend.

As reported at Wine Searcher:

Trajadura (also known as Treixadura) is one of the key grape varieties found in Portugal’s fresh Vinho Verdewines. Commonly combined with Loureiro, Alvarinho(Albarino) and Arinto, Trajadura adds body and alcohol to these wines, as well as crisp, citrus characters with some stonefruit and apple. The variety is increasingly being used to make high-quality wines on its own as well.

This wine is packed with complexity, ranging from quince to green apple, with a bead of key lime zest and grapefruit pulp in the aroma. The flavor is medium-bodied and complete, with a sturdy mid-palate and medium acidity. It’s a showstopper of a wine at a bargain price.

These three wines have a huge amount of application for food and wine pairing due to their acid levels and bright styles. Of course, they are great on their own as well, but with the right dishes, they really come to life. Seafood is the natural pairing, and here are some recipes to pair them with:

This is a rare opportunity to try three different, but all top-grade, expressions of the Albariño grape. Not only are these wines perfect for the end of summer, but as you saw with the recipes, you can carry the enjoyment into the fall season for roasted seafood dishes of all types.

So my buying advice is predictable here: buy them all.

Thank you, everyone! Spread the word about TCWE!

This offer has closed. Thank you for your interest.