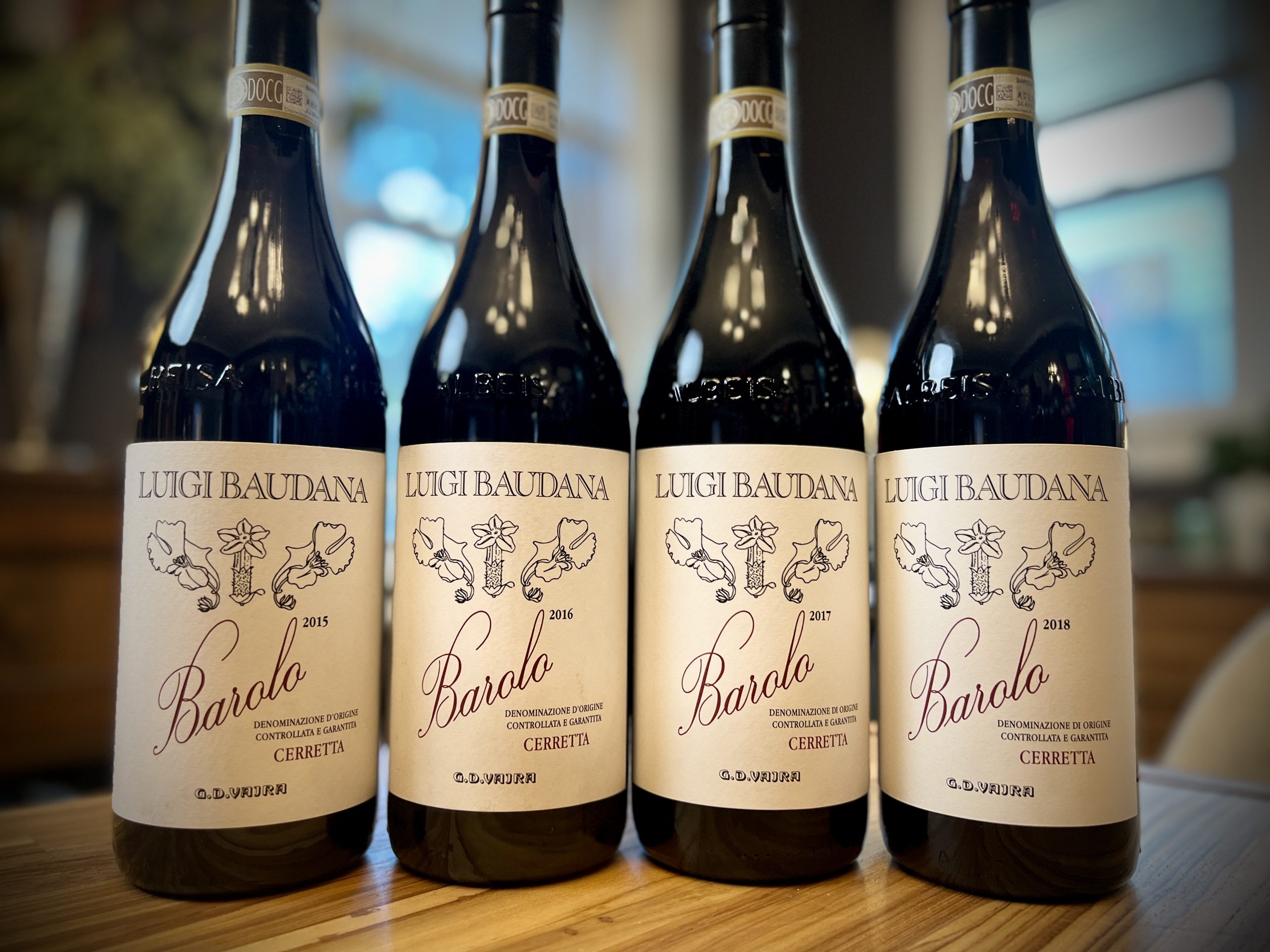 If the offer is still on, you’ll see the order form at the bottom of this page.

This is a once-in-a-lifetime offer.

Rarely do the stars align in terms of vintages, importation, and warehousing to allow for four vintages of three incredible Barolos from one of the best producers around.

This is something special, and if you’re a fan of fine wine and building a great wine collection, this is for you.

About G.D. Vajra and Luigi Baudana

These are two of my favorite Barolo labels, both produced by Giuseppe Vajra. They are classic wines, showing all the personality you expect from top-level Barolos: age-worthiness, detail, finesse, power, dried fruits, leather, licorice, graphite, and so much more. Each of these wines is a top-level Barolo that will make you happy.

G.D. Vajra is a young winery, only in its second generation. In 1968 young Aldo Viara (the family was spelling their name with an “i” at the time) was a rebellious young man in Torino, joining the counterculture movement and the protests that were happening worldwide at the time. His parents wanted him to have no part of “the scene,” so they sent him to his Grandparent’s farm in Barolo for a summer of work. He was 15 years old.

Take note that Piedmont generally, and Barolo in particular, was a very poor area in 1968. The post-WWII economy was still a wreck, and families were abandoning farms due to lack of income (sad but true).

Young Aldo was put to work in the vineyards, far away from the protests in Torino and his friends.

But during that summer, something magical happened. He fell in love with the land, the vines, the world of Barolo, and the wines. Within a few years, he was working on his agricultural degree and soon took over the estate — as a teenager!

His counterculture spirit brought new ideas to this old land, the most important being an insistence on organic farming. G.D. Vajra was the very first to embrace organic farming in the region, and soon this hippie teenager was getting attention from the locals (they thought he was crazy).

As the demand for Barolo started to grow exponentially in the 1980s and 1990s, Aldo was able to continue experimentations, including developing his own selections of vine material, planting ‘lesser’ grapes such as Fresia on prime Barolo property, and even being the first to plant Riesling in the area (their Riesling is off the hook good if you can find it).

Now the three children of Aldo and his wife Milena – Giuseppe, Francesca, and Isidoro – are taking up the reins of running the company, maintaining their family tradition.

In 2008, Aldo approached Luigi Baunada about purchasing his business and property. Luigi was getting up in years, and had no heirs. Aldo loved the property and the traditions that Luigi had, and wanted to preserve it … label and everything. Aldo Vajra became the custodian of the Baunada legacy, and the wines are still made from the old Baunada vineyards and at the Luigi Baunada winemaking facility.

This “winemaking facility” on the Baunada estate is one of the smallest in all of Barolo. It’s literally a small room in the house, with a couple of tanks and a few large barrels. Only three lightbulbs illuminate the room. Note that the Luigi Baudana label is entirely from 2.6ha of vineyards, with a total production of under 800 cases.

Before I get into vintage details, let me share my opinion regarding vintages. This is controversial, and I get a lot of shit from parts of the wine community because of this, but I’m holding to it.

There is no such thing as a “good” vintage vs. a “bad” vintage. It’s just a vintage, with its own personality and whether it fits an individual’s personal taste. And if you love wine, you WANT the vintage to show in the glass.

In 1997, Barolo had an incredibly hot vintage resulting in ripe fruit, higher sugars, more alcohol, and big flavors. The locals, especially the traditionalists, didn’t like it. But lo and behold, Wine Spectator gave that vintage 100 points, called it perfect, and the vintage of the century. It sold like hotcakes in the USA.

1998 came along, and it was much cooler. Longer hang times. Less ripening. Lower alcohol levels. Wine Spectator rated the vintage quite low. But you know who loved it? The old timers in Piedmont, who said it was a return to what a great Barolo vintage is all about.

And guess which vintage aged better? To this day, 1998 (as well as 1996) Barolos are some of my favorites in my cellar.

So look to each vintage for its own personality, which should be reflected in the wine, rather than asking “which is better” because better is in the eye of the beholder.

Let’s break down the vintage details for you.

Heavy snow and spring rains kicked off the year, boosting water reserves for the vines. Warm summer days and cool evenings made for a classic vintage, with wines packed with violet, vibrant berry aromas, and fine tannins. An exceptional and balanced vintage. Wines are mid-weight, aromatic, fresh, and balanced despite a major heat spike in the middle of summer. An exceptional vintage in many ways.

A slow start to the growing season due to a long winter started off the season. Warmer temperatures built up over the summer, and a wide window for ideal harvest conditions (going well into September). “Balanced, vibrant, and tense Barolos” – Wine Spectator (which rated this the highest of the four vintages). Slightly more tannin than the 2015s. The 2016 vintage was described by some growers as “Il sogno” – “the dream.” Long-term cellar potential (over 20 years) but powerful and enjoyable wines in the short term with adequate decanting.

Frost and drought hit yields hard, which can sometimes actually be a good thing (a “natural pruning” in some ways). Summertime brought a very hot and dry growing season with a shorter ripening period than usual, similar to 2003. However, unlike the 2003s, the wines have higher acidity due to cool nights. Great tannin structures and loads of ripe fruits.

Not as much of a candidate for long-term aging as the 2016s, these are excellent wines if you want to pop into your Barolo sooner rather than later. I love them! Also, this is the vintage to focus on if you’re new to Barolo but like California Cabernets due to the ripeness of the wines. Drink in the next 5-10 years.

Early spring rains and high humidity set a path toward mildew problems, but a warm growing season kicked in and led to an excellent harvest. The harvest occurred for many producers in October, a throwback to the old days, with perfectly ripe fruit and great acids due to the cool nights. The resulting wines are very age-worthy, similar in structure to the legendary 1996 vintage. 2018 was a bountiful year, with yields back to normal after the short production of 2017.

Serralunga is one of my favorite towns and regions within Barolo. It’s a tiny little hamlet with charming old streets, a tall ancient tower, and amazing views in every direction.

It’s an area known for well-structured wines due to the particular soils of the area, resulting in firm tannins and aging potential.

The Luigi Baudana Barolo Serralunga is one of the most consistent Barolos out there and a relative bargain in the world of Barolo. You can expect textbook Barolo aromas of rose petals, graphite, dried red fruits, and worn leather.

The Vinous review of the 2017 Barolo is typical of the reviews you’ll find on these wines.

Baudana — a hidden gem — is really known only among Barolo aficionados. Just three single-vineyard bottlings are made from this cru, and Luigi Baudana may well be the only one exported to the United States. Baudana is the name of the vineyard, of the village, and of Luigi and Fiorina’s family. Their roots run deep, and the family’s legacy is important to this unique place.

Cerretta is a tiny little hamlet on the way to the town of Serralunga and is also the name of a coveted vineyard parcel where the Luigi Baunada Cerretta is produced from under one acre of vines.

Yes, under one acre. In other words, this is as rare as you can find. Only a small amount of cases came to the United States. To be able to tap into a vertical of Cerretta is unheard of.

These are powerful wines, wines of place, that really show off the top quality of the Barolos of Serralunga.

The Vinous review of the 2015 is typical of what you’ll find in this wine:

This is one of the crown jewels of Barolo.

It’s the highest elevation vineyard in the area, and thus a distinctive microclimate making it stand head and shoulders above other wines (pun intended).

Among the historical vineyards of Barolo, Bricco delle Viole is the highest and the closest to the Alps. It rises from 400 to 480 meters above the sea level, on the Western ridge of the village. Its name, “Hill of Violets”, originates by the flowers that here blossom early due to the perfect south exposure. Up above the fogs, Bricco delle Viole enjoys the earliest sunrise and the last sunset every day. Thanks to its vines dating back to 1949, a dramatic diuturnal temperature range and this pure light, Bricco delle Viole generates a sophisticated and profound Barolo of bright aromatics, chiselled tannins and subtle minerality.

Typical descriptors of Vajra’s Bricco delle Viole include elegant, detailed, purfumed, and polished. This vineyard is far away from Serralunga, which we discussed with the Baudana wines, and thus brings more of the elegant side of Barolo to the equation. Those that love Burgundy will love this wine.

Typical of what you’ll read about all of Vajra’s Bricco delle Viole wines is what you see here from Vinous:

This may be the only opportunity you’ll ever have to instantly build verticals and horizontals of Barolos of this caliber.

It’s an opportunity to build a collection, to have something truly special in the cellar for a future occasion, or to put together what may be the greatest holiday gift ever.

Prices on Barolo are going nowhere but up. The discounted prices on these gems and the range of vintages represent a special moment. Take advantage of it.

Luigi Baudana wines will be fuller-bodied and bigger than the G.D. Vajra.

The G.D. Vajra wines will be more elegant and detailed.

All will age exceptionally well, especially those from 2015 and 2016.

The 2017 vintage will be the most ‘forward’ and fruit-packed in style, while the 2018 vintage made for very balanced and approachable wines.

Each of these wines speaks to what Barolo is best known for: distinctive and characteristic aromas, elegance with amazing power, and captivating details that can only develop with time. There is nothing quite as grand as Barolo!

If you only buy one, two, or three bottles

If you buy one bottle, buy the Vajra Bricco delle Viole 2015.

If you buy two bottles, add the Baudana Cerretta 2015.

If you buy three bottles, add the Baudana Serralunga 2015.

In other words, the 2015s are the biggest opportunity here. You can depend on the 2018s to be in stock for the foreseeable future, but when those 2015s are gone, they are GONE.

NEW! Your payment to Solo Vino for the Friday offer is contained on the order form. No more back-and-forth emailed invoices and payments. Yay!!

This offer is closed; thank you for your interest.