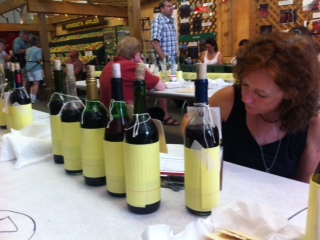 The day begins early, which is almost always a glorious summer morning with birds singing and an absence of mosquitoes.  The yellow jackets have not yet found the trash cans, the animal barns smell of animals rather than their manure, the deep fried food vendor’s clothes are still tidy, and most noticeably attitudes are always running high with smiles on faces left and right.

This is what I’ve walked into for the last twelve years, as I get ready to do my duty for the State of Minnesota and carefully examine, rank, score, and detail a menagerie or wines the variety of which a screenwriter couldn’t make up.  Not just grapes (which breaks into white, red, and fortified and further into native Minnesota and “other source”) but also chokecherry, elderberry, raspberry, dandelion, apple, pear, peach, apricot, and the list goes on and on. 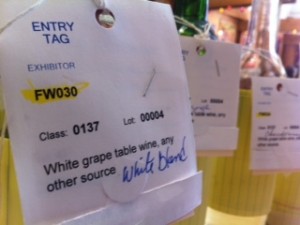 There are two rounds of judging: a preliminary round to weed out the truly awful bottles that we wouldn’t wish upon our worst enemies, and the final round where a team of judges covers multiple categories to issue the ribbons.

For many years (since 1999) I’ve worked on the first round and I’ve always been prompt to my judging duties in order to get category number 22: Miscellaneous Other.  Anything that doesn’t go into the normal categories ends up here, in a wonderful cacophony of fermented science.  It is here that you’ll find wines from carrots, beets, watermelon, thistle blossom, and more.  It’s a wonderful grouping with no standards, which I find invigorating.  The two oddest entries in this category over the years were an army worm wine (which was pretty disgusting but I sent it to the final round simply out the hutzpah it took to make it) and a blueberry Hi-C Kool Aid wine.  It was neon blue in color, like glass cleaner, and the entrant mixed in extra sugar and fermented it to dryness.  My guess was about 8% alcohol or so.  It was great, the best blueberry Kool-Aid wine I could imagine.

To judge wines in which there is no benchmark or ideal is fun (if it’s the first cactus fruit wine you’ve ever had, how do you know it’s good?).  What it comes down to is competent wine making (or the lack thereof).

We judge first by sight: is the wine muddy and cloudy or clean and bright?  I don’t mind a little cloudiness myself as long as it’s natural (I’d rather have that than something sterile filtered to the point of not being interesting).  Next up comes the aromas and the first search is for faults: volatile acidity (a big problem in home winemaking), skunkiness (usually from unsterile practices), or any other of the dozens of things that can go wrong with fermentation and bottling.  The taste, honestly, is a minor part for me in the first round but mainly I’m looking for a fruit/sugar/acid balance that keeps everything in harmony.

This year, for the first time, I judged in the Final Round which was a thrill.  Shoulder to shoulder with Nan Bailey, Sam Haislet, Annette Peters, Tom Gill, and Ted Ferrell amongst others.  We worked in teams of three (I was with Nan and Sam) and each team of three judged five categories.  We had chokecherry, raspberry, lambusca (concord), chardonnay, and my favorite miscellaneous other.  A few notes and observations:

•    Every year for the last ten years the quality of home winemaking goes higher and higher.  It’s amazing just how good some of these wines have become.

•    As I told Nan Bailey, “Remind me to never get into the raspberry wine business.”  Raspberries have a harder time making quality wine than other fruit, it seems (except in the case of dessert wines).  There was an off-balance aspect to many of the wines that was a result of the fruit itself never dancing well with the acids.

•    Lambrusca (concord) has always produced sub-par wines with mousy aromas and untamed acids, but this year there was a breakthrough.  One wine was, hands down, the best lambrusca I’ve ever tasted.  Comparing notes with Nan, she felt the same way.  It was clearly superior winemaking and I think we are starting the see the taming of the beast happen.

•    If you make beet wine be prepared for quite a bit of constructive criticism (starting with the question “Why?”).

•    Whoever made the Thistle Blossom wine might have a future in the wine business.  It was outstanding!