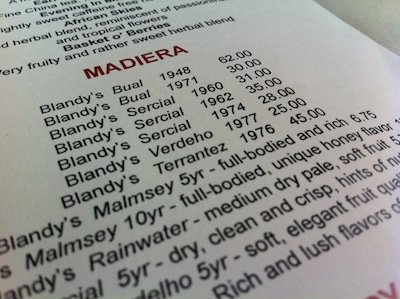 It’s fascinating to me, when asking people what their favorite wine lists are, how little W.A. Frost comes up. I don’t know if this is a result of the restaurant being seen as part of the ‘old guard’, or if wine people simply don’t get there as often as they should.  If you have ideas as to why please comment and let us know.  Regardless, I’ll say flat out it’s one of the best wine programs in the upper midwest. I’ll detail why I think this in a future post, but for now I want to concentrate on one thing: the Madeira selection at W.A. Frost.

A little background: Madeira is an island about 400 miles off the Northwest corner of Africa, and it’s under the political control of Portugal.  (If you’re looking for the ultimate ‘off the grid’ food and wine getaway this is where you want to go .. but the cat is out of the bag thanks to this New York Times article) On the island of Madeira they make fortified wines, just as they do in Oporto (where they make Port).  Fortified wines are made by adding neutral spirits (usually brandy) into a partially fermented tank of wine.  This does two things instantaneously: it shoots the alcohol level to about 20%, and because of the alcohol level it kills the active yeast cells thus stopping fermentation.  At this point the wine is aged in casks a minimum of five years, often times far longer.

But here is what makes Madeira different: it is intentionally oxidized in a hot environment (which simulates what happened on sailing ships hundreds of years ago), thus developing enormous complexity that is different from what you find in other dessert wines.  Aromas of toffee, caramel, tea leaves, rose petals, dried raspberry, and dark chocolate are possible.  And the best thing: because the wine is fully oxidized it is completely stable … a bottle opened today will taste the same months or even years from now.  Before refrigeration, this was obviously a factor that made Madeira one of the most popular wines in the world.  For more on the specifics of Madeira and how it’s made check out the Wikipedia page on the topic.

So what’s the big deal about the W.A. Frost line up? Their selection of vintage dated Madeira is second to none in town (you have to visit Chicago to find a similar offering).  Vintage Madeira is a rarity, and because of the rise in worldwide popularity and the obviously limited supply, it’s becoming harder and harder to find.  There are examples out there going back to the mid 1800’s (I believe Meritage has or had an 1861 for a time … like Frost, they are also strong believers in the enjoyment of Madeira).  These are gems that add incredible value to our wine community, and well worth sharing a glass with a friend (or three, especially if you order the 1948 Blandy’s Bual at $62.00 a glass).  Check out the entire W.A. Frost wine list and menus on their website.