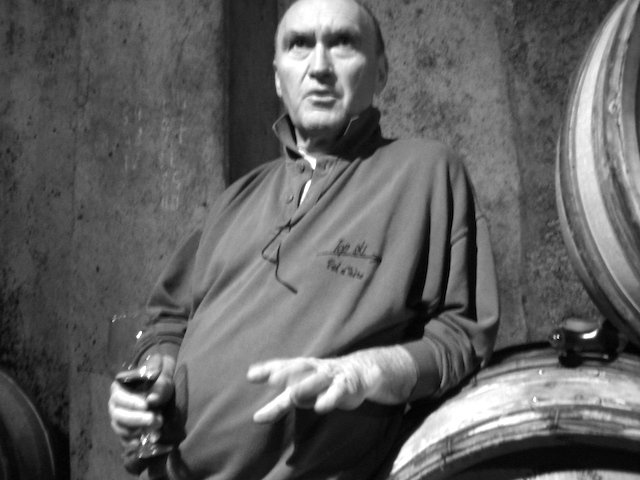 We lost one of the greats in the wine world, a person unknown to many wine drinkers in America but hugely influential in his region (Northern Rhône) and the center of one of my favorite personal wine stories, Alain Graillot. He was 77 years old. (Here’s the Wine Spectator obit.)

In the 1980s, while well established in a career in the agrochemical industry in Paris, Graillot caught the wine bug. He bought a small property near the town of Pont de l’Isère, in the Crozes-Hermitage region of the Northern Rhône. At the time, the wine press (led by Robert Parker) was notoriously demeaning to Crozes-Hermitage, always pointing out that it was a far lesser region compared to its neighbor, Hermitage. But it was the only land that Graillot could afford (his winery was always a bootstrap operation). With some quick education from winemaking friends in Burgundy, some of the best names in the business, he started making wine under his eponymous label.

The critics took notice, and before you knew it Alain Graillot became the standard-bearer of the potential of Crozes. His wines were racy, lively, soulful, complex, and age-worthy. Graillot left his established career in Paris to move to his property and make wine full time.

Though this is a relatively common story today, it wasn’t in the 1980s. Back then, it was unheard of for someone to simply ‘catch the wine bug’ and make a successful go at it, especially in France, for there was history, rules, protocol, and established business patterns that were expected to be followed. This was even more so in a traditional region like the Northern Rhône.

In other words, Alain Graillot was a badass.

Fast forward to Minnesota in the 2000s, and I’m working for the local distributor for Alain Graillot. Our import manager at the time was Annette Peters, whom many of you have heard me talk about as one of my key mentors in the wine business (she now owns Bourget Imports and Domaines and Appellations Imports). It was Annette who popped the first bottle of Graillot for me and I was immediately hooked. It was unlike any other Syrah I was selling. While the Australians were getting big scores for their inky, higher alcohol, thick and jammy Shirazes, here was a wine that had lift, energy, verve, and begged to pair with food.

Quite quickly, I had more Alain Graillot in my personal cellar than any other brand. Granted, it wasn’t a large cellar at the time, but seeing those bottles lined up for future enjoyment always made me smile and appreciate the investment we made in them.

Fast forward to 2007. Spencer was 11 years old and we wanted to get him to Europe for the first time. We outlined a marvelous trip focusing on Paris, the Southern Rhône, and the Northern Rhône. A highlight for me was going to be a visit to Alain Graillot.

It was May of 2007 and it was a glorious spring. The poppies were in bloom throughout Chateauneuf-du-Pape. A bit further north, in Crozes-Hermitage, the vines were leafing out but the canopy had not yet covered and hid the gnarly, twisted trunks of the vines. Bees were flying from flower to flower, making the blossom bounce after flying away.

We had an address and a phone number for Alain Graillot scratched on a piece of paper, but that was it. This is before smartphones, of course, so we took out our hand-written directions and maps. I’m insistent on being on time, so we arrived in the area an hour early. Lucky for us.

We drove and drove and none of the signs matched up to any of the words on our instructions. For over 40 minutes we covered almost every back road in the region, finally giving up and spotting an old man in one of those classic tiny old French cars in his driveway. I didn’t speak an iota of French, and he spoke even less English, but through hand gestures (drinking wine and saying “A-lahn-grai-OH!” over and over) he finally motioned for us to follow him.

Five minutes later we were there.

Alain Graillot, like our tour guide in the tiny car, spoke little to no English. But wine people have their own language, and we walked the vineyards and talked about vine age, grape varieties, his history, vintages, soil, and much more. We made our way back to the winery and he said, “We taste the wine, oui?” Heck yeah!

He motioned for me, Angela, and Spencer to head to the barrel room and he would grab glasses. When he joined us in the cellar Spencer noticed he was holding four glasses. Spencer shot a look at me saying “What do I do?”

Spencer, though growing up around us and wine his whole life, had politely refused every offer we made him as a kid for a thimbleful of wine, but here we were in an important place with an important guy, working!

I said, “Spencer, you’re in France. Do what the French would do.” And he took his glass.

Graillot grabbed his wine thief to get some barrel samples for us. He started with the just-finished 2006 Crozes-Hermitage and filled up our glasses, including Spencer’s.

I still get teary when I say this: Spencer’s first glass of wine was served to him by Alain Graillot. 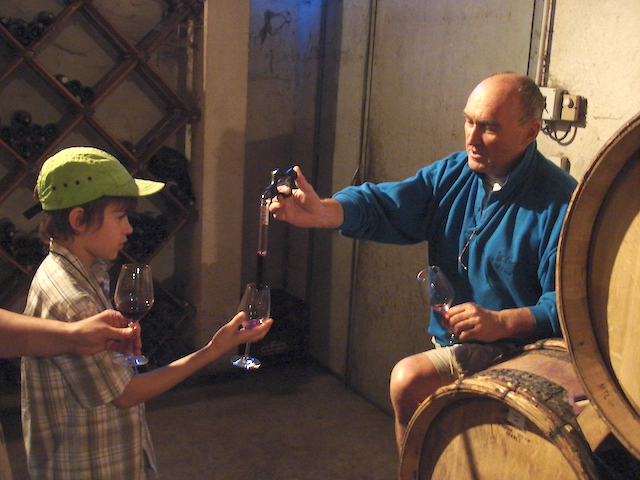 I couldn’t believe it, and I’m so happy I had the wherewithal to snap a picture.

Graillot looked at Spencer. Spencer swirled the wine and looked at the color. He stuck his nose in the glass like he saw us do thousands of times. And then … he GULPED the whole glass. One-shot, straight down the gullet. Graillot started chuckling hard.

Last night we went down to the cellar, where I only have a few bottles of Graillot left. We found the oldest one, a 2007, the same year of our visit. This is one of the many reasons to stash some bottles away with no plans of exactly when you’ll drink them … the moment will present itself and you can embrace every drop of it.

The wines of Alain Graillot can be found with some hunting. In fact, the local allocation just landed a few weeks ago (Minnesota gets one little pile of these wines once a year). Local wine shops that I’d try first include Thomas Liquors, North Loop Wine and Spirits, and France 44. They are delicious young but improve with time. They are higher in acidity than people expect, and showcase the elegant and detailed side of Syrah. Always have with food.