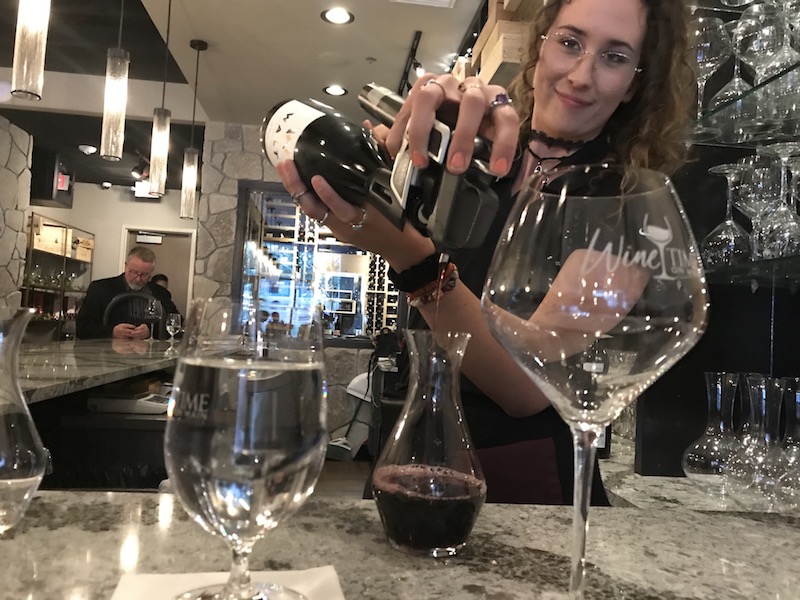 First, a little background on the business of wine bars. There is probably no harder way for a restauranteur to make money than to open a wine bar. Unlike a coffee shop, you can’t take it to go. Unlike a taproom, you’re making far less margin. And unlike the beer world, you can’t down three or four wines and still be upright. Most customers have one glass or two while taking up space for an hour or two. The turn rate is low. It’s a tough way to make money.

Then you have cities like Minneapolis used to be and St. Paul still is, that have excessive rules in place regarding the percentage of revenue that has to be food vs. alcohol. To maintain compliance, you have to operate as more of a restaurant than simply a wine bar. (The elimination of the ’70/30′ law in Minneapolis directly led to the ability of Troubadour Wine Bar to open up. Wine bars like Troubadour are all over the place in Portland, Seattle, and San Francisco but are difficult to open here.) Additionally, in urban Minnesota you cannot operate as a joint on and off sale destination unless you’re a taproom (growler sales) or Minnesota farm winery. In many other urban areas, including Washington and South Dakota, a wine bar can also sell wine as a retailer, opening revenue streams that work to pay the bills.

So in Sioux Falls, we visited two great wine bars, yet there are even more that we didn’t have time to hit. Yes, in little Sioux Falls on the prairie they are kicking our Twin Cities’ butts when it comes to wine bar culture. If you’re traveling to or through Sioux Falls, these are the places to hit.

WINE TIME ON MAIN
330 S Main Ave., Sioux Falls, SD
https://www.winetimeonmain.com
Located just up the hill and around the corner from Minerva’s, the old-school steakhouse destination restaurant of the area.

Wine Time on Main opened just last fall, ahead of a deep and difficult winter. They are just off the beaten path, but free covered and attached parking probably saved them during the harsh winter months. It’s compact, modern, stylish, and sexy.

And they offer 240 wines by the glass.

Yes, you read that right.

And not just a mass of cheap stuff. Nowhere in the country have I come across a selection such as this, where a wine geek can burn through a lifetime of savings on the quest to try many of the great wines of the world, all served in correct Riedel stemware and at the proper temperature. Preservation is done through the Coravin system, with the servers well versed in handling the machinery.

Owner/founder Bob Novak is often there (he’s the guy in the background of the photo above). He used to be in the garbage business, but his love of wine and travel led him to make this (pretty astounding) leap into the wine bar business.

Most wines are available in 3oz, 6oz, 9oz, and bottle service. Prices, when you really look, are a touch high (a good litmus test is to see where Veuve Cliquot Champagne NV is priced at … normal retail is around $50-60, sale retail in December is usually $40-50, the normal restaurant price should be under $100 … here it’s $119.50). But in terms of access and availability to the rarest wines of the world, a higher markup is fine with me just for the access to gems. Plus, hunt a bit and you’ll find bargains (I enjoyed the Walt Pinot Noir). In the end, a slightly higher markup in exchange for dependably fresh wines served at the right temperature and in good stemware is a trade I’ll make anyday.

Don’t think all the wines are like these. There is a solid list of more affordable selections as well, but the window I’d suggest hitting is the $15-25 a glass range. That is where the biggest bang for the buck is found at Wine Time on Main, with some good names and good vintages that will make you happy. For food, the cheese and meat board is highly recommended.

Overall, Wine Time on Main is a great destination especially after a filling dinner and you seek out a taste of something special in a very chill atmosphere. In any city, even New York and San Francisco, it’s an uphill battle to sell wines by the glass of this level. But with innovations such as the Coravin, it’s now possible for a market like Sioux Falls to support a wine bar concept such as this. If an ambitious sommelier found the right 1000 square foot space in Minneapolis I think it would work here as well.

Many of you have been to my wine classes at North Loop Wine and Spirits in Minneapolis. If you took that room, raised the ceilings about six feet, expanded it about five or six times, and put it on the main floor with windows all around, you get the feel of this incredible location. Stone walls, old wood beams, the kind of atmosphere only time (and not architects) can create.

R Wine Bar opened this past winter in a very happening area of Sioux Falls, near the river and downtown, where farm-to-table restaurants, breweries, bakeries, butcher shops, and hotels are opening left and right. The “R” in the name is Riccardo Tarabelsi, born in Florence, Italy, who has run some of the better restaurants in Sioux Falls for years and is now his own boss.

Okay, here you go: this is the exact concept for a wine bar that I want in the Twin Cities. An approachable and affordable list, a happening scene with live music, simple food (antipasti, panini, salumi, dolce … wonderfully simple and clean), private spaces for wine classes, and a dedicated customer base that fills the room on a regular basis.

There is a complete lack of pretention at R Wine Bar. And it’s all about the wine. Yes, you can get a Bud Light or a local craft brew. Yes, you can get a cocktail (nothing fancy, thank you … that will come in the lower level speakeasy due to open this summer). Yes, you can get enough food to call it dinner. Best of all, when the sun goes down and the lights are dim, everyone looks good in this room.

Twenty-one wines by the glass, ranging from $7 to $14. There are some big brands on the BTG list (La Marca Prosecco, MacMurray Ranch Pinot Noir … they can do better), but some gems to be had as well (Kuleto Native Son from Napa, for instance). I don’t know if they are picking Raymond “R Collection” wines because they like them or because of the name, but the preponderance of that brand on the list prompted me to ask the server if the wine bar is owned by Raymond Winery.

The real wine power is found in the by the bottle list, which is heavy on but not exclusive to Italy. The layout is fantastic, giving a little geographical info and some background on the regions before showing a crisp and curated selection of wines. You can find a ton of great wines here in the $30-40 range by the bottle. Argiolas Cannonau for $32? Yes, please.

Our server was the owner’s son, a sharp as a tack 18-year old that did a better job explaining the wines than most servers I’ve encountered lately in the Twin Cities. Staff training on wine knowledge is definitely something lacking in our neck of the woods (and something I’m trying hard to change!).

TWO MORE WINE BARS that we didn’t have a chance to get to.
We got good insider info regarding these places, with a dependable thumbs up from people we trust.

Bin 201 looks to be another fine destination, but without the ambition of the two listed above. Big names such as Coppola, Kendall-Jackson, and Stella Rosa dominate the list. Private parties look to be their specialty, and Enovac machines allow for self-service of wines by the ounce (much like WINO, the Wine Institute of New Orleans, one of my favorite wine bars in the country). The private wine room looks like a tremendous destination for private events. See their gallery here: http://www.bin201sf.com/gallery.php

The Market is a culinary center and destination, with a strong retail and wine bar presence. Their wine by the glass program is tight, with a few bigger names but some smaller production gems at great prices. Graziano Zinfandel for $7. Neyers Red Blend for $14. Siduri by the glass. There’s some good stuff here.

The menu reminds me of our dearly departed Toast Wine Bar, which filled a need in the local wine community: great wines with simple cheese, meat, and flatbread plates. A recreation of Toast is desperately needed in the Twin Cities, please!

Here’s my take. What’s interesting about markets like Sioux Falls, Fargo, Rapid City, Des Moines, etc. is that there is a vibrant but small wine scene combined with passionate people and affordable rents. In bigger markets, such as the Twin Cities, rents and other factors (new minimum wage laws without a tip credit for one) make opening wine bars like this prohibitive if not impossible. The numbers don’t add up. But pay half the rent, have the ability to sell at retail as well, and suddenly there is viability.

Head on down to Sioux Falls. It’s a great weekend escape. Stop in Pipestone on the way (where my extended family is from) and have the broasted chicken at Lange’s Cafe. Stop at Round Lake Vineyards on your way back, then head north to Jeffers Petroglyphs. A Friday morning to Sunday night trip that you’ll really enjoy.