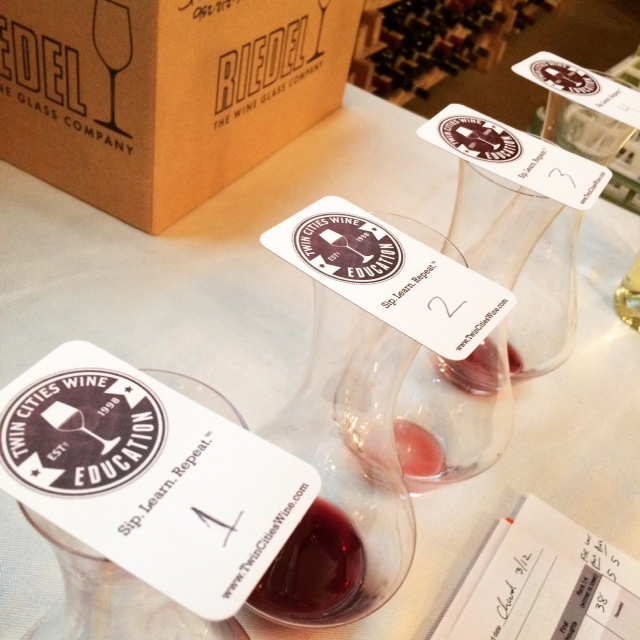 Sometimes the unexpected occurs at blind wine tastings, in which the results and commentary you assume will happen are tossed off to the wind and jaws drop as the bottles are revealed. It was such an occurrence at the Blind Burgundy Battle 2015.

This is an annual event on the Twin Cities Wine Education calendar, where we blind taste four Chardonnays and four Pinot Noirs from diverse places of origin to see who will win the popularity contest. Within the white and red selections is a top notch Burgundy to see if it’s true that nothing can compete with the storied French hillside when it comes to Chardonnay and Pinot Noir quality.

Of course, a tasting like this doesn’t really prove anything. With such a variety of styles, vintages, and winemaker touches available the truth of the matter is that an event like this is a comparison of four wines and producers, not four regions. It’s simply comparing snapshots, but then again isn’t that what wine tasting always is?

The best part though is that it’s damn good fun.

I’m not a fan of most blind tastings. Far too often they are done with no context or direction, or worse yet no theme. Truly blind tasting (no idea about the grape, region, vintage, etc.) is a parlor trick. It’s a sideshow. Guess my weight, guess my height, guess the grape, guess the vintage. Seeing the poor dudes in the movie Somm loose their shit because they’re too busy trying to nail it is indeed reflective of our somms-wanna-be-chefs-because-they-crave-the-attention-too culture. What I didn’t like about Somm is that it put the pure enjoyment of wine on the back burner.

So how was the Blind Burgundy Battle any different? Two key things:

1) Participants knew the grape variety and theme, and ahead of the tasting we did a mini-seminar on both Chardonnay and Pinot Noir to help explore the idea of typicity of these varieties. The most important point made during the mini-seminars came down to this: Chardonnay is more of a winemaker’s grape, capable of holding more makeup on its face; Pinot Noir is more of a vineyard reflection, a grape who gets uglier when the lipstick of oak and manipulation is heavy handed.

2) More importantly: I emphasized that this tasting was about hedonistic pleasure, for I firmly believe that wine exists to make us happy. This was the litmus test for ranking the wines. Wine numero uno is the one that makes you happiest. Simple as that.

The Chardonnay flight consisted of a range of four wines with four vintages: a 2009 Premier Cru Chablis, a top grade 2012 Willamette Valley, a 92 point 2010 superstar from Argentina, and just to see how it performed when nobody knew what it was, 2013 Rombauer Chardonnay (generally considered by the wine trade as the textbook “butterbomb” Chardonnay).

Right after the wines were poured, everybody was instructed to form personal opinions and thoughts about the wines (no discussion) and rank the wines from #1 (personal favorite) to #4 (least favorite). We then went wine by wine and had participants hold up fingers to show their ranking, and we totaled that number. Therefore, the wine with the lowest score is the winner. We also tallied total first place and total last place rankings.

Only after they committed pen to paper for the rankings and tallied up the scores did we discuss the wines openly (guessing vintages, prices, country of origin, and other fun things). There were 15 tasters and I did not participate in the ranking since I knew which wines were which. 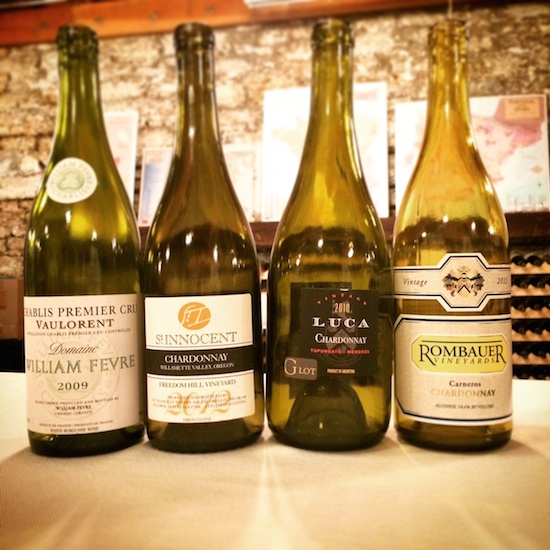 Analysis: This was a close contest for 2nd-4th place, with a span of only 3 points. Most interesting in that group was the William Fevre Chablis result, with five each winner and loser votes … very little middle ground: either people loved it or hated it.

As for the winner? What can I say? It showed texture, richness, and roundness but at the same time youthfulness (it was the only 2013 in the line up). A fascinating result to me, for Rombauer is an easy wine to draw a big target on and shoot at. It gets kicked around flippantly in the wine trade yet it was a clear winner in this little fashion show. 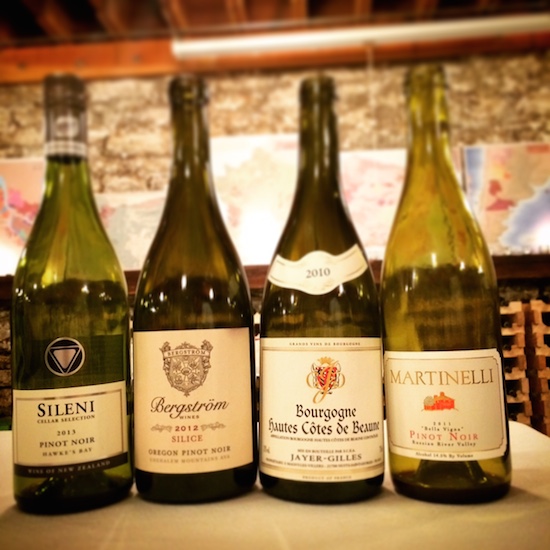 Wow! I didn’t see this one coming. Let’s start from the bottom and go up.

Jayer-Gilles is a Burgundy producer that I’ve admired from afar for almost twenty years, never having experienced the wines of Gilles Jayer, the third generation owner-winemaker. Check out what Steven Tanzer has to say about him:

“Many Jayers make wine in Burgundy, but Gilles Jayer is easily among the best of the bunch. His wines are flamboyant and fleshy, marked by ripe, sweet fruit and lavish, spicy new oak. The estate’s Côte de Nuits-Villages is always a perfect ringer in a blind tasting with Burgundies of higher pedigree. Domaine Jayer-Gilles is also well known for its Pinot Noirs from the Echezeaux Grand Cru vineyard. Even the Hautes-Côtes de Beaune and Haute-Côtes de Nuits bottlings reflect the style of Gilles’s more highly pedigreed wines.”

That last line, combined with the stellar 2010 Burgundy vintage, is why I picked this wine for the tasting. (This selection was $49.99 a bottle.)

I was looking so forward to trying this wine, and knowing which decanter held it skewed my thinking from the get-go. I immediately grabbed it and poured myself a taste. The earthiness, a hallmark of this producer, was profound. Aromas of compost, overripe raspberry, decomposing oak leaves, and clove spice all tumbled forth. It was marvelous. But then again, I’ve read about this producer for years and knew what to expect. I glanced up at the crowd, who by then were getting to that glass, and watched taster after taster smell the wine, reel back, smell it again, then cautiously look askance around the table. People were just not digging it.

The results speak for themselves: never, in all my years of leading blind tastings, have a I had a wine get the last place ranking from over 85% of the participants. As I asked the crowd for descriptors a common theme was “cow poop.” It was indeed an earthy wine.

What did I think of it? Privately I loved it, but my thinking was swayed by 18 years of reading about this guy’s wines and never having tried them. In the same way that a little bit of really stinky cheese can be delicious (especially when eating it outside instead of in your house), this wine had the same joyous funk.

The third place wine was the lowest priced wine in the bunch, at well under $20 a bottle. It held its own, but also showed the problem with trying to make inexpensive Pinot Noir: the numbers just don’t add up between the cost of the fruit and production vs. what has to be charged to keep the winery in business. In other words, almost all under $20 a bottle Pinot Noir simply can’t compete on the same level as those in the $50-$100 range. However, that being said and this being a blind tasting, it performed well, with the typical New Zealand cherry cola aromatics and high toned acidity, and gathering three first place votes is a good indicator indeed of overall quality. New Zealand Pinot Noirs are inching their way into the Minnesota market, and they are worth exploring. Last note on this wine: it was the lowest alcohol wine in the flight, at 12.5%. When you taste a 12.5% wine right next to a 14.0% wine the lower alcohol wine ends up tasting limp and too light. This is a common problem in blind tastings, but still worthy of experiencing. Alcohol is textural, and the higher alcohol wine might not be as balanced but it will often feel more ‘correct’ in the mouth in a line up such as this.

I’m going to lump the second and first place wines into a collective “Two first place winners” grouping for the spread was only one point and both of these wines clearly outpaced the other horses in the race. Interestingly, the second place winner (the Martinelli) actually received more first place votes than the technical “winner.” Thus let’s just say they both won.

The Martinelli, clocking in at 14.5% alcohol, was the highest octane of the bunch. Again, working off assumptions that get kicked around in the wine trade, a Pinot Noir such as this gets instantly dismissed by many sommeliers simply based on the alcohol content. In fact, legendary somm Rajat Parr banned such wines from some of his lists, though he was caught in a tasting liking the higher alcohol selection slipped to him. See A Gadfly in the Pinot Noir in the New York Times. One of my favorite wine articles ever.

In the technical first place was a wine I dearly love and boy did show well at the tasting: Bergström “Silice” Pinot Noir 2012 made by Josh Bergström of the Willamette Valley of Oregon. The Silice is the home vineyard property of Bergström, named because of the quartz in the vineyard. From the Bergström website:

Silice (pronounced “sea-lease”) is French for silica, the shiny, quartz rock found in the sandy, beach soils of the Chehalem Mountains AVA. Found in the 21 acres of vineyard land contiguous to the winery, these bright, reflective oceanic soils produce our most concentrated, spicy and fruit-forward Pinot Noir, a wine we now call “Silice.” This wine is the epitome of our biodynamic farming efforts on sandstone soils, studying and revealing a special terroir that creates wines of great finesse and power. The 2012 vintage represents the inaugural release of this wine under its new name, but between 2003 and 2011, you knew it as de Lancellotti. The vines are now 15 years old and expressing themselves in a tremendous way.

Did we answer the question of Burgundy vs. the world? Of course not, for this is a snapshot of a moment seen through everybody’s personal lenses. But in the end we did learn about Chardonnay and Pinot Noir, and just how different wines can be. And that, in essence, is what it’s all about.