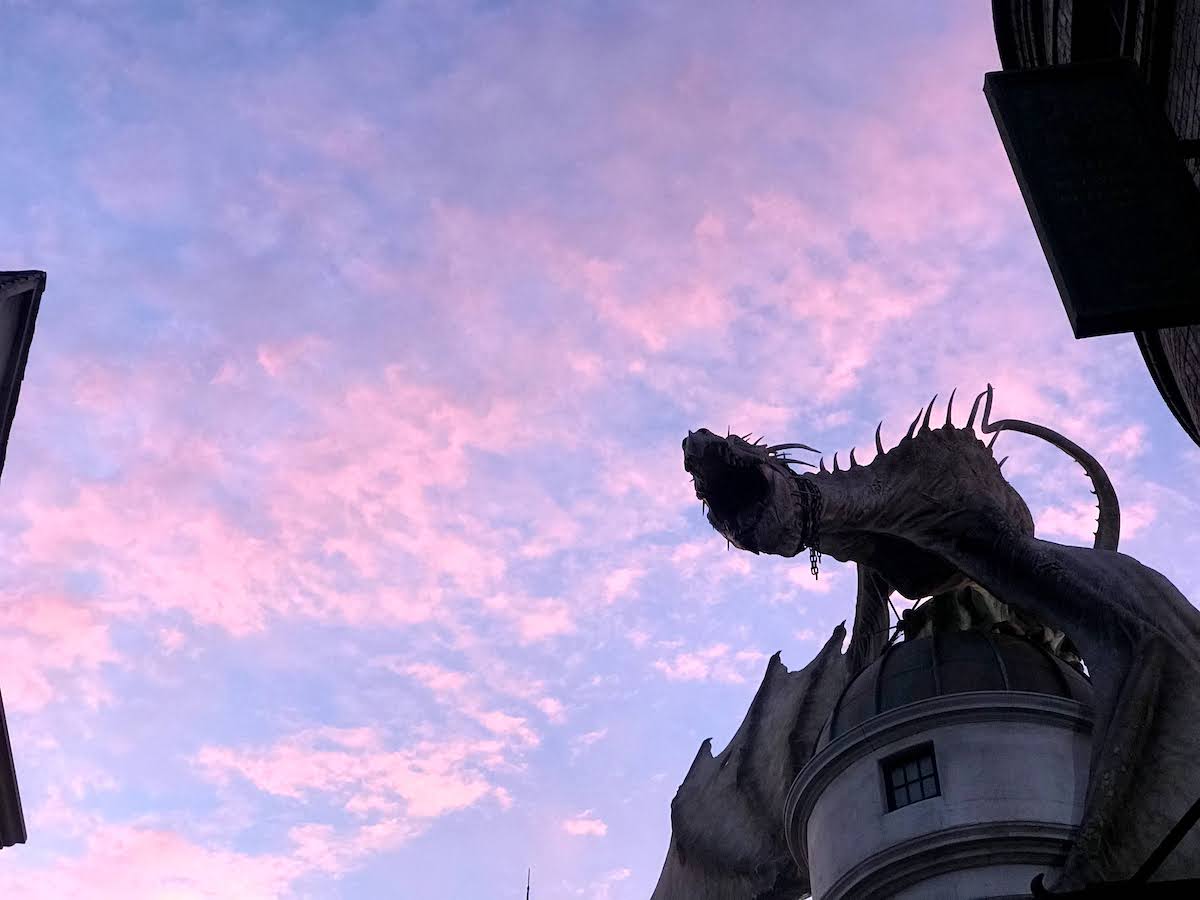 What happens when you’re a wine lover in one of the most popular destinations in the country? As you read this, we are just landing from a glorious seven day escape to Florida.

We had never been to Florida before, much to the amazement of friends. We love the desert, and Arizona is our normal escape path when the winter monster decides to settle in back home. But this year was different, a milestone birthday for Angela, and in her words “When I turn fifty I want to feel like I’m five!”

Being huge Harry Potter fans, there was really only one clear choice: we would head down to Universal Studios Orlando visit The Wizarding World of Harry Potter, ride the Hogwarts Express, and enjoy a Butterbeer in Hogsmead. More on the details of that part of the trip later (good god it was awesome). After a few days in the chaos of the amusement park, we would head down to Sanibel Island for a few days of beach time.

Being a wine lover at an amusement park

Universal Orlando is quite an operation, competing with Disney World, and one of the draws they have created is an area called CityWalk.

It’s clear the restaurants are run by Universal Orlando, not as individual entities. Some restaurants are designed for this location alone (VIVO Italian Kitchen, the Chocolate Emporium, a ‘burger meets sushi’ concept called CowFish, and the “NBC Sports Cafe and Brew”) and others you have heard of before but the license, branding, and recipes come from the restaurant groups (Bubba Gump Shrimp Company, Voodoo Doughnuts, the BK Whopper Experience, etc.). This is much like the restaurants at the MSP airport, where the airport and their food service company lease the name and branding and food of Smack Shack, Red Cow, Black Sheep Pizza, etc.. If you’ve ever eaten at the airport and wondered why the food isn’t as good as it should be, that is why.

The goal of CityWalk is popularity and profitability (I’m all for both), and if a restaurant doesn’t meet their numbers then out they go. Just like at MSP.

The food at all the restaurants in CityWalk can be summed up as such: calories to replace those you burnt during the day, in the shape of various flavors that will not offend anyone.

So it’s a tourist hotspot, obviously. So what about the wine?

When you’re in a place like this, it’s hard to be a wine lover. Wine lists here are built to last and be very profitable, which means larger brands that will not run out of stock, and brands that are known to the average wine drinker.

Hopping from restaurant to restaurant it’s clear that some particular national wine brands have done a good job at selling their wares to the decision-makers (unlike a standard restaurant-wholesale sales rep relationship, places like this tend to work directly with the wineries or wine groups on the ‘national program’ and skip over the wholesale sales rep commission, thus carving about 5-8% out of the cost of the wine. This is a common arrangement with higher-end national restaurant chains too, such as Ruth’s Chris Steakhouse. The wholesaler still delivers the wine, but there is little or no ‘meeting with the rep’ to taste what’s new).

So if you’re into Kim Crawford Sauvignon Blanc or Murphy-Goode Merlot you’re in luck.

The prices are pretty standard. $9-15 a glass for most wines is the range like it is at most places, but the quality level is just a step lower.  I was happy to see Cline Zinfandel commonly available, so I helped deplete quite a few glasses of that.

Part of the problem for wine lovers in a situation like this is that the profitability and revenue expectations of the restaurant ensure a low-quality wine program even when there’s a high-quality cocktail or beer program. Let me explain.

Most cocktails get served at an 8-14% cost. That $10 cocktail you ordered, which is made with top-quality ingredients, by hand, right in front of you (up the theatrical value) probably has $1.40 built into it. The happy hour cocktail for $6 that you slam a few of? Maybe fifty cents cost, not including the ice.

Beer is cheap for the restaurant and a moneymaker when served by the pint. Figure anywhere from seventy-five cents to two dollars cost, for a drink that will sell for $5 -$10. From the why-not-just-drink-water Coors Light to the local craft brew, there is something for everyone, and the cost percentages range from 10% to 20%. And beer drinkers tend to not stop with one beer.

Then there’s us. The wine drinker.

We tend to nurse a glass. Enjoy one, maybe two. And maybe over the course of a couple of hours.

Wine is perishable, unlike beer in a keg or in a bottle, and unlike sprits on a shelf. Once it’s opened the restaurant has a few days to pour it off or dump it out.

Wine is confusing for consumers and even more so for the young server. Unemployment rates are at an all-time low, and thus it’s nearly impossible to find and train good service staff at restaurants (and even harder to have reliable workers in the kitchen, where they make a quarter of what a server does). Thus, easier to have big brands that the management think will sell themselves.

Then you have the big brands, pushing their big deals for the big park. Better pricing, secured placements, guaranteed availability. Lower costs per glass = more profitability. The customers will order a $10 glass of wine, so why pour one with $2.50 cost built-in? Why not use this one and get it down to $1.80?

And wine doesn’t make as much money as cocktails or beer. As much as we gripe about the cost of wines at restaurants (where a glass often covers the cost of the bottle, i.e. a 25% cost if you pour 6oz glasses or four to a bottle) it pales in comparison to cocktails or beer. But cocktails are impossible to price out quickly in your head, and beer is cheap enough that nobody really cares.

So us wine lovers have a problem.

You end up with a wine list that is safe, predictable, and devoid of personality. But it sells, because wine drinkers like to drink wine, and seeing the sales numbers reinforces to the powers that created the list that they are doing the right thing. You see this in full force at TGI Fridays, Chili’s, and Bubba Gump Shrimp Company. You see the silent hand of this effect locally at the likes of Crave and other restaurants. Even some of our reliable and awesome local restaurants bite at this poison apple.

And this leads to the crux of this essay: what is a wine lover to do in a situation like this?

There is no ‘hunting for the bargain’ because there is no bargain to be had.

There is no ‘ask the somm for a suggestion’ because there is no somm and the staff has not been trained in on wine.

In this situation, there are three options, all viable.

1) Hunt the wines by the bottle, knowing that you may find some bigger bang for the buck as long as you’re willing to enjoy 750ml of the stuff.

2) Have the commercially produced big-name wine by the glass and don’t try to have a ‘wine moment’ with it. Instead, have a ‘drinking fermented grape juice without thinking about it’ moment.

Back to Diagon Alley

It’s beyond magical. It’s fully immersive. It’s jaw-dropping. And it’s so inspiring, knowing that all of this came out of the brain of JK Rowling.

Like three excited little kids we zoomed to Olivander’s Wand Shop as our first stop in order to, you guessed it, pick out our hardware for a week of casting spells and charms and making magic happen.

Olivander’s is worth the price of admission alone, and far more impressive than videos you’ll see on YouTube can portray it, which means you jump over an already high bar. Without taking up an hour talking about all the details let me leave it at this: at Olivander’s, like in the rest of Diagon Alley, each and every single little minutia of detail has been thought out.

The boxes are piled high. The immersion into the magical world is real. The sounds of joy and excitement are in the air. You carefully choose from all the different wands, packaged in amazing boxes with the Olivander’s logo on them. So many to choose from! Do you pick by type of wood, or by a character from the books? Personally, I was drawn to the ‘vine’ wand for obvious reasons.

After you buy your wand, assuming it’s one of the ‘interactive’ wands, you get to wander Diagon Alley and make magic happen. Find the right spot, wave the wand in the right way, and wonderful things occur in the storefronts on with the water fountains. It’s fantastic.

I only wish my wand could make a shitty glass of wine taste better. VINO MELIOREM!

Alas, time for another cocktail.

I can’t state this with enough conviction: if you’re a fan of Harry Potter, put Diagon Alley at Universal Orlando on your shortlist. It will change your life!